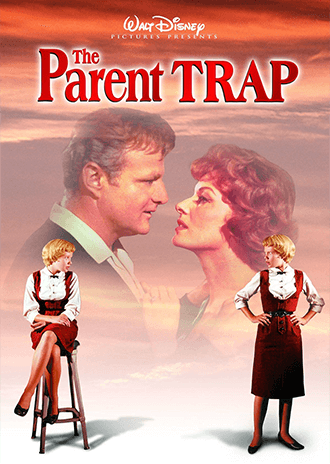 "Let's get together, yeah yeah yeah!"
"If their love's on skids, treat your folks like kids
Or your family tree’s gonna snap!
So to make 'em dig, first you gotta rig
What do ya gotta rig? The parent trap!"
Advertisement:

The Parent Trap is a 1961 Disney live-action comedy film, based on the 1949 German book Das doppelte Lottchen, that starred Hayley Mills. It yielded three sequels which are hard to fit into one continuity (and are pretty much forgotten about) and also a 1998 remake that starred Lindsay Lohan in her feature film debut.

Twin sisters Sharon and Susan have been separated nearly at birth when their parents, Mitch and Maggie, divorced. The year their father is considering remarrying, the sisters meet each other at summer camp. On meeting, they plot to get their parents back together, a plot that involves each pretending to be the other. Hilarity Ensues.

In the 1980s, Hayley Mills played Sharon and Susan as adults in three made-for-TV sequels. In The Parent Trap II, Sharon was the parent entrapped by her own daughter; in Parent Trap III, it was Susan's turn. Parent Trap: Hawaiian Honeymoon was a direct sequel to III featuring Susan and her new family (including identical triplet daughters).

The Parent Trap provides examples of:

The sequels contain examples of: