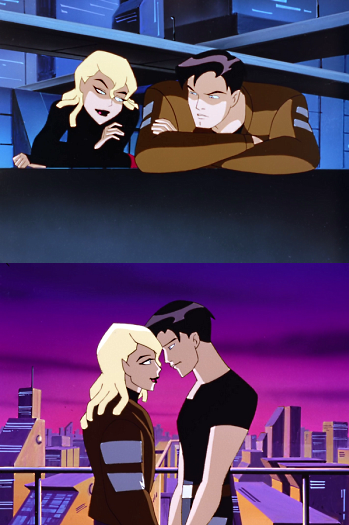 How does a TV show demonstrate that Bob and Alice are a couple? How to do it quickly and without making a big deal about it? Simple, Alice wears Bob's jacket. If Bob's some kind of athlete, expect it to be his letterman jacket.

This is Truth in Television, and not limited to jackets. A little research indicates that the reason girls do this is fourfold. First, they're big and comfy. Second, it marks both of them as taken. Third, it's like a day-long hug. Finally, it smells like him. A humorous (but no less romantic) variant is to have a man get annoyed his partner is borrowing his hoodies without asking.

This can be more than just an "I like this and I like you" gesture. It can be a symbol of commitment. Sometimes it's a class ring, or a necklace, or a favorite hat. The point is that one partner is wearing something that until then was always seen on the other so that the world knows they're a couple.

It need not only be women wearing something of their men's collection. A man is less likely to wear his girlfriend's clothing, but a token is often passed in that direction, as in Chivalric Romance when a man receives The Lady's Favour, usually in the form of a scarf or other small piece. Couples of the same gender aren't immune to this trope, either; it can be played straight (although not straight), or be expanded to them outright sharing their wardrobe.

The Japanese term is kare-shatsu.

Sub-Trope of Fashion-Based Relationship Cue. See also You Must Be Cold, which can be a one-time romantic gesture and serve as part of a Ship Tease. Her Boyfriend's Jacket is a long-term appropriation of clothing to demonstrate a relationship. Also related to Sexy Shirt Switch, where she wears other articles of clothing after sex. Both are signs of intimacy. Sexy Shirt Switch is sexual intimacy, Her Boyfriend's Jacket is emotional intimacy.