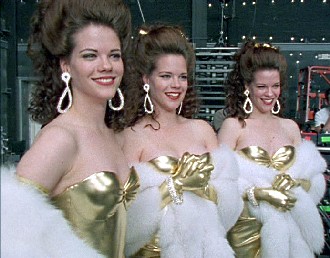 With twins, you might get a boy and a girl. But triplets are almost always the same sex. That's what the media seems to think. Usually, they will be all identical, but sometimes, they are all fraternal for easy recognition. In Real Life, identical twins are always both boys or both girls (for obvious reasons), but most triplets are two identical and one fraternal and only have a fifty-fifty chance of all being the same sex. All-fraternal triplets only have a one-in-four chance.

So why are Same Sex Triplets so common in fiction? Because of Cast Calculus. Having one of each sex gives you balance, but three people don't divide evenly that way. So triplets are portrayed as three of a kind to give a sense of wholeness to the group. The same appeal makes Real Life Same Sex Triplets more marketable, so they are more likely to achieve fame as a group than mixed triplets. And if they happen to be children, Same-Sex Triplets are just plain cute.

Compare Power Trio and Rule of Three. Many Twin Tropes also apply to triplets. If this trope is averted, they may be ¡Three Amigos! or Two Guys and a Girl.