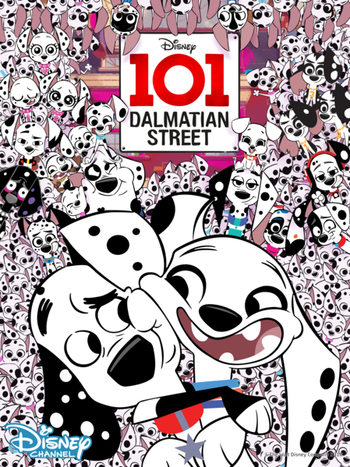 So many pups to meet at 101 Dalmatian Street!
Advertisement:

101 Dalmatian Street is a British/Canadian animated comedy series spun-off from Disney's 1961 film 101 Dalmatians. The show is the second television series to be based on the animated feature, following 101 Dalmatians: The Series (1997-1998), which was a direct spinoff of the original movie. In contrast, 101 Dalmatian Street is only loosely based on the film, explicitly taking place 60 years after its events. The series is co-produced by Atomic Cartoons (Atomic Betty) and the London-based Passion Pictures (Gorillaz).

Taking place in the London neighbourhood of Camden Town, the series follows the adventures of a large family of Dalmatians whose names all begin with the letter "D", and live at the titular address. The parents of these 99 pups are firedog Doug (Rhashan Stone) and doctor's assistant Delilah (Ella Kenion), the latter being a descendant of Pongo and Perdita. The eldest of these siblings are Dylan (Josh Brener), a pedantic control freak, and Dolly (Michaela Dietz), a reckless and rebellious tomboy, and this unlikely duo help keep the house in check when their parents are busy at work.

Suburban life is blissful (albeit chaotic) for the Dalmatian family, until a privileged young boy with ties to a familiar foe enters the fore, and our puppy heroes soon realise their lives are a lot more perilous than they could possibly imagine...

Along with The 7D, The Lion Guard, Tangled: The Series, and Big Hero 6: The Series, 101 Dalmatian Street is a part of a resurgence in animated spinoffs of Disney animated films in the latter half of The New '10s.

A few sneak peaks of the series aired early on Disney Channels across Europe (most notably on December 14, 2018 in the UK and Ireland with the episode "Dog's Best Friend" and the short "Merry Pups", and in Germany the day after with "Boom Night"). The series officially premiered March 18, 2019 in EMEA, with the UK and Ireland getting the second segment of the first episode, and Belgium, France, and Germany the first segment of the second episode. In the United States, the show would debut on Disney+ the following year, on February 28, 2020, with a television premiere on Disney XD on March 29, 2021.

Compare with The Loud House, another show focusing on a large family that have alliterative names. A detailed article about the show and an early review can be found here

. The German trailer for the series can be found here

, the French one can be found here

, and the English version of this trailer can be found here

. The theme song can be found here

On June 17, 2021, the person running the Twitter account Disney Television Animation News claimed that they spoke to a member of the crew, who told them that the series was cancelled due to low ratings in North America,

both on Disney+ and Disney XD in the United States. This was confirmed the following day on June 18, 2021, as series director Miklós Weigert revealed that there are no plans to produce a second season.

Now has a Best Episode Crowner!

This show provide examples of:

Not a family of rabbits, but the spots fit.
Feedback

Even the Royal Corgis are impressed by Dolly's skateboard.

Example of:
Cool Board

Alternative Title(s): One Hundred And One Dalmatians Street

Even the Royal Corgis are impressed by Dolly's skateboard.