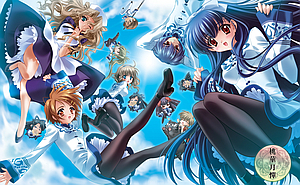 Something weird and fascinating is going on, but our brains are melting just trying to make sense of it all. There's this boy, you see... only (s)he might be a girl, and there's this world, or this collection of worlds, and... oh, heck, check back again after we finish assembling the Jigsaw Puzzle Plot.