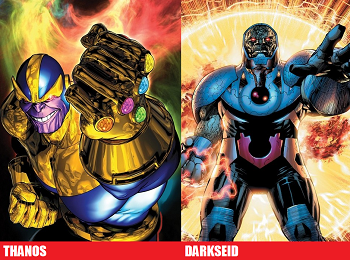 Occasionally, when two creators are striving to fill the same niche or appeal to the same demographic, one will end up creating characters and stories that bear a more-than-passing resemblance to the other's.

For instance, Marvel and DC, being the most prominent producers of superhero comics, have led a sizable rivalry, sometimes friendly, sometimes not. This is sometimes reflected in the creation of characters. You could argue that, given the sheer number of characters in comic books, certain superpowers will overlap. Occasionally a new character, even one who appears for a short time, seems suspiciously similar to another.

Usually, this is done as overt parody or homage. If not, it can be seen as one ripping off the other; however, occasionally it happens by pure coincidence, and the characters become fondly remembered equivalents. When the rival creators both fully embrace this trope, it may be hard to sort out the original characters from the Captain Ersatzes.

A Sub-Trope of Expy (where a character is based on another character) and Captain Ersatz (which is basically a character with his/her name changed and a few other aspects to distinguish that character from the original). When this happens to TV shows, video games or movies, you have Dueling Shows, Dueling Games and Dueling Movies, or a case of Follow the Leader. Contrast Corrupted Character Copy, when a character is a deliberate Take That! towards another character.