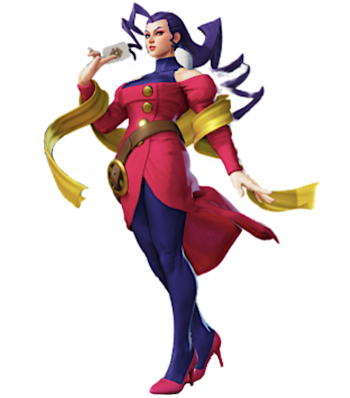 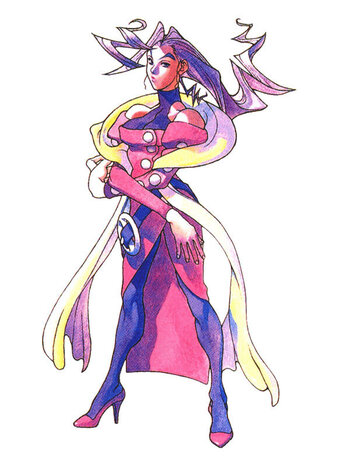 What's the meaning of fate? You shall know.
Origin: Italy 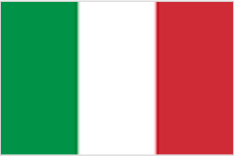 Gameplay-wise, Rose can best be described as a Jack-of-All-Trades. Similarly to the Shotos, she does not excel in any particular area and has options for many situations, inclined towards a defensive play-style. Fitting for her nature as a fortune teller and a magician-type character, Rose is designed around misdirection and mindgames. She carefully strings her opponents along, prodding at them until she is able to force a favorable outcome where she can easily predict their next move and counter it, as if she were bending destiny to her will. To do this, she has an arsenal of strong poking and whiff punishment options, a projectile in Soul Spark that launches deceptively far from her sprite and can be fired at different speeds to throw her opponents' timing off, a series-first projectile reflector in Soul Reflect, a risky but powerful anti-air grab in Soul Throw, and a damaging combo ender and spacing tool in Soul Spiral that makes many of her approaches deceptively safe if performed at the right spacing.
Advertisement:
Guy 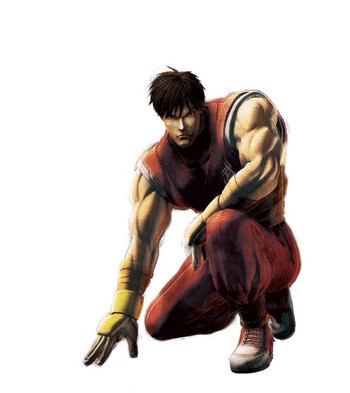 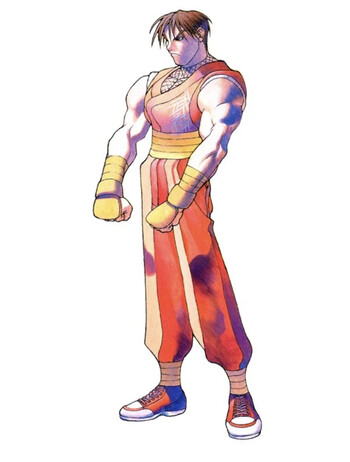 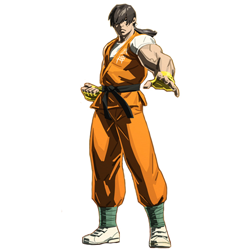 Fighting style: Bushin-ryu Ninjutsu
Appears in: SFA, SSFIV
Voiced by: note Jim Byrnes (Street Fighter TV Series), Hiroaki Yamada (Final Fight CD), Tetsuya Iwanaga (Street Fighter Alpha series, Namco × Capcom, Final Fight Revenge), Tsuguo Mogami (Super Street Fighter IV, Street Fighter X Tekken; Japanese), Jason C. Miller (Super Street Fighter IV, Street Fighter X Tekken; English)
A Japanese-American Ninjutsu master dressed in an orange-red ninja shozoku and Nike/Converse sneakers. Guy is the 39th successor of the Bushin style of Ninjutsu, a martial arts style dating back to Japan's feudal age. He traveled to America to improve his martial art skills and found himself in Metro City, where he befriended fellow fighters Cody and Haggar and assisted the two in their battle against the Mad Gear gang in the original Final Fight. In the Alpha series, it is established that as a practitioner of Bushin-ryu, he is an upholder of the world's balance, and travels the world as a vigilante bringing an end to several criminal organizations. He develops a new form of Bushin-ryu in the original Alpha, tests his new style against his Master Zeku in Alpha 2, and then finds himself involved with Bison and his organization in Alpha 3. He later appears in Super Street Fighter IV, still seeking to bring his old partner Cody back to the side of good, and to save his friend Rose from her bleak destiny. Despite his steadfast devotion to his duty of carrying out justice in the shadows, he surprisingly has a fiancee, Rena, whose younger sister Maki is Guy's rival for the Bushinryu title.

By the time of Street Fighter 6, he's taken on a new pupil, a young American graffiti artist named Kimberly, who becomes the 40th successor of the Bushin style.

In his home game, Guy was the speed-oriented fighter between Cody (balanced) and Haggar (power). As such, his entry into the world of Street Fighter expands greatly on what was seen of his fighting style in Final Fight, giving him the playstyle of a fast rushdown brawler. Guy boasts some of the best mobility in the games he appears in, being able to cross the screen in seconds with his blistering walking and dashing speeds and far-reaching jump arc. As a ninja, Guy's style also incorporates many deceptive maneuvers, being able to alter his own jump arc with a dropping elbow, command grab opponents who dare try to oppose him head-on midair, and mix up opponents with a command run and command jump which have multiple followups. However, while these attacks can make his pressure terrifying at first glance, they have very noticeable gaps which often leave Guy vulnerable for brief moments, making them very risky and punishing if the opponent guesses or reacts correctly.
Sodom 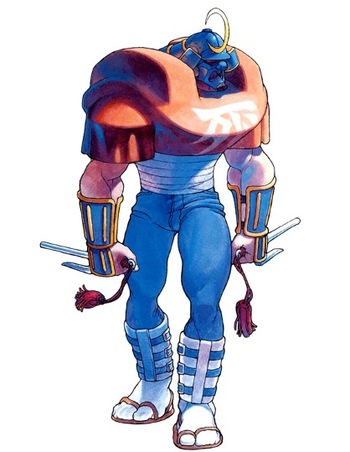 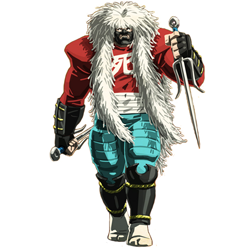 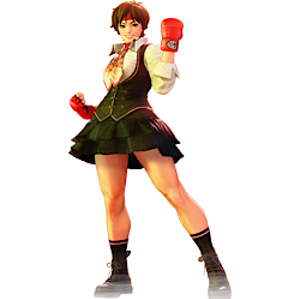 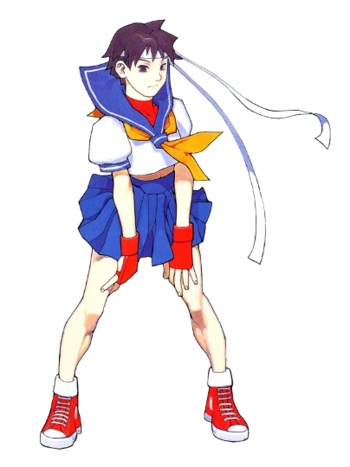 Pleased to meet you!
Origin: Japan

Sakura returns in V, having finally graduated high school, and now works a part-time job at an arcade. She's also shown to be going through a rough patch, doubting her future as a fighter and wondering just what she's going to be doing for the rest of her life.
Rolento 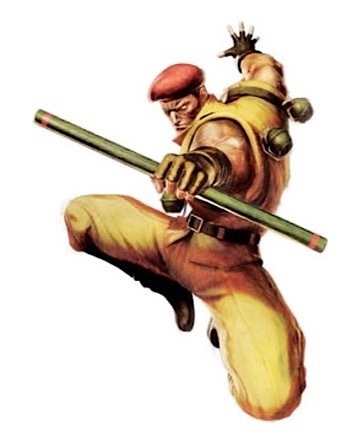 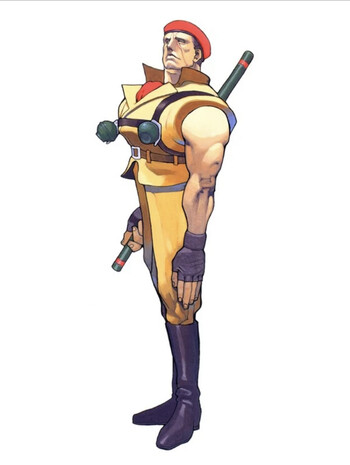 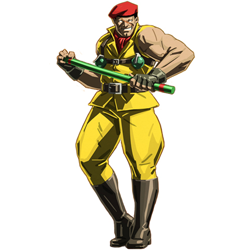 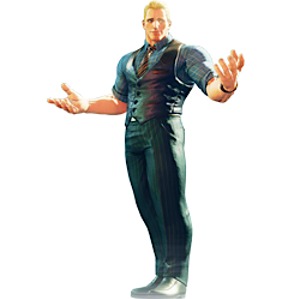 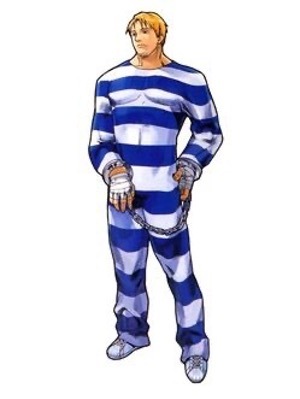 Desk work just isn't my thing, you know? Looks like I can have a little fun now.
Origin: USA

He reappears again in V, having gone through quite the transformation, having officially ditched his handcuffs and prison uniform, donned a nice suit, and became the new mayor of Metro City, after being exonerated of his crimes by Mike Haggar.
Karin 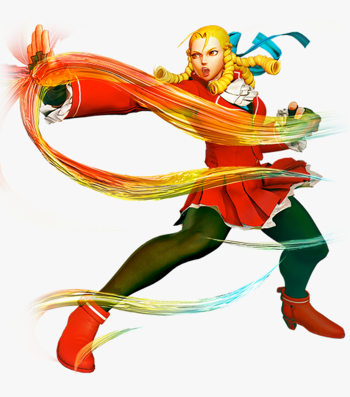 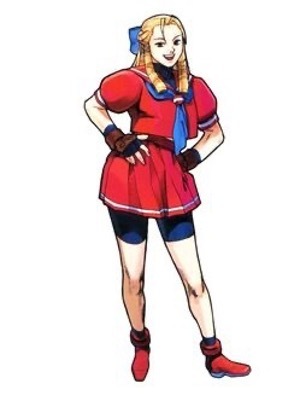 I'll show you the divide in our class.
Origin: Japan

She makes a return in Street Fighter V, ditching her school uniform for a new, fancier ensemble that still retains the feel of her classic outfit. She's taken in former Shadaloo soldier Birdie as a house guest, and gone on a quest to find a Senjutsu master, best known as Oro, who fought her grandfather many years ago. She's also evidently holding her own tournament in New York.
Rainbow Mika 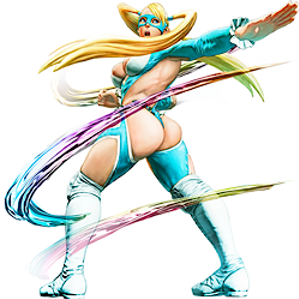 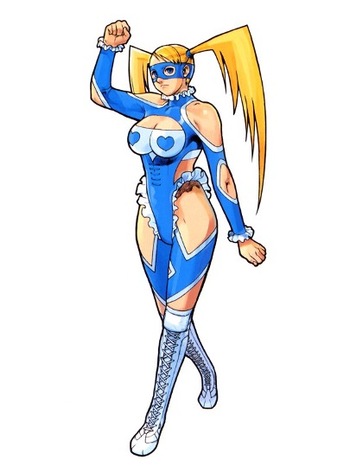 HEY! Seven colors fly to the ends of the Earth! With fiery heat from burning muscles! Brighter than the first star of the evening! Be it grapples, body slams, or blows, all will be in awe of my... RAINBOW!
Origin: Japan

She makes her return to the series in Street Fighter V, with her tag-team partner Yamato Nadeshiko (yes, that's her ring name) assisting her in some attacks. She goes on a pilgrimage around the world with Zangief, in order to learn about "Muscle Spirit".
Juni and Juli 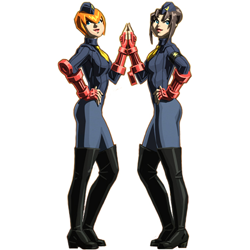 In Street Fighter IV continuity, the Dolls are still in Shadaloo's "care" and under Bison's orders. After Seth finds out that Bison wants to use them to kill him, he sends out Juri to capture them so he can use them as experimentation subjects; Juni and Juli try to fight back, but are overpowered. Cammy and Guile catch up but are only able to rescue Juni, whereas Juli and the other girls are locked inside capsules and taken to Seth's laboratories. In Cammy's ending, Juni wakes up from her coma in an hospital, with Cammy taking care of her; in T. Hawk's, Juli is alive elsewhere and under the care of a kindly elder couple, but with Trauma-Induced Amnesia.

In Street Fighter V, Juli somehow got captured again by Shadaloo and instilled to the Dolls, details on how that happened are yet to be given, but in the end she is saved along with all other Dolls after Shadaloo’s downfall; Juni remained at Cammy’s side after SSFIV, Shadaloo tried to get her back but Cammy prevented the assault and Juni is never seen in peril again throughout V’s story. 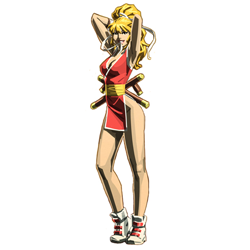 The Heir to Bushin-ryu
Don't take it so seriously, I didn't!
Origin: Japan

Fighting style: Bushin-ryu Ninjutsu
Appears in: SFA3
Voiced by: note Miki Nagasawa (Street Fighter Alpha 3(Upper/MAX), Capcom vs. SNK 2)
Full name Maki Genryusai. Introduced in Final Fight 2, she is the younger sister of Guy's fiancee Rena and also trained in the art of the Bushin style. She was once The Leader of a biker gang during her high school years. After her sister and father are kidnapped by a revived Mad Gear, Maki enlists the help of Mike Haggar and South American swordsman Carlos Miyamoto to rescue them. Afterward, she sets off to search for Guy to challenge him for the Bushin succession.

Ingrid
See her entry on this page: Street Fighter: Other Media