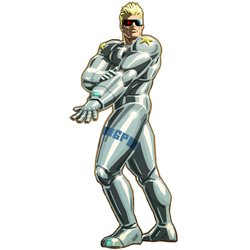 The protagonist of Street Fighter 2010. Kevin Striker is a galactic policeman who fights against criminals who have implanted themselves with armored parasites that turn them into mutants.
The US localization of the game confusingly tried to tie Street Fighter 2010 to the previous Street Fighter game by renaming him Ken Masters, and claimed that he became a gifted scientist who creates a substance known as Cyboplasm, which grants those subjected to it superhuman strength, 25 years after winning the tournament from the first game. However, the Cyboplasm is stolen, and Ken's lab partner, Dr. Troy (Jose in Japan), is murdered. Ken then dons a cybernetic suit of battle armor, and pursues his partner's killer. No, really.
Dr. Jose / Dr. Troy 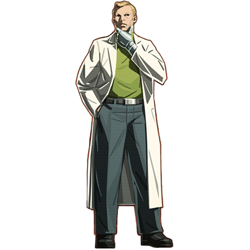 A brilliant scientist who created the armored parasites, and strives to create the Ultimate Life Form, the secret of which lies in Kevin Striker's body.
The US localization renames him to Dr. Troy, and makes him Ken's lab partner and co-creator of Cyboplasm. After his apparent murder, Ken goes on a quest to find his killer, only to find out that Dr. Troy faked his own death, and merely wanted to see what the Cyboplasm in Ken's body was capable of, and Dr. Troy is revealed to be the final boss of the game. 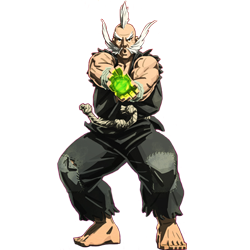 "You must defeat me to stand a chance."
Origin: Unknown Flag

A legendary fighter who was rumored to be Ryu and Ken's master due to a translation error. Gaming magazine Electronic Gaming Monthly ran with it and created Sheng Long as an April Fool's prank, detailing how to trigger the fight against him, the conditions of which were nearly impossible. This prank heavily influenced the creation of both Akuma and Gouken. 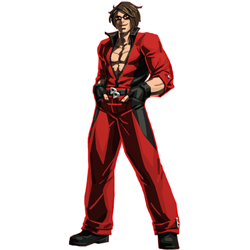 Full name Daisuke Dejima, code name God of Thunder. Strange genes in his body were awakened by a mysterious organization, and he became one of the three Code Holders.
Luke 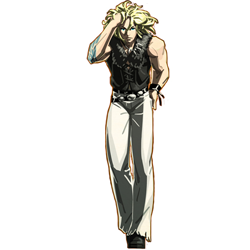 The second Code Holder, code name Fallen Angel, who works together with D. D. in trying to stop Death from blowing up Metro City.
Ingrid 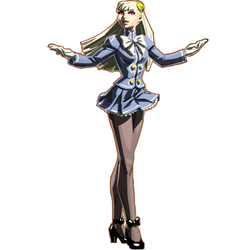 Eternal Goddess
"You young whippersnappers! I'll teach you to get in my way!"
Origin: Unknown Flag

Voiced by: note Masako Jou (Street Fighter Alpha 3 MAX, Capcom Fighting Evolution, Project X Zone 2)
The third Code Holder, code name Eternal Goddess. Unlike the other characters from Capcom Fighting All-Stars, Ingrid continued life after her debut's cancellation. She then debuted in Capcom Fighting Jam as the sole original character, and her sprite was ported over to the PSP version of Alpha 3 MAX as a Guest Fighter, where she claims that her power was stolen by M. Bison. She also has a role in the background story of Street Fighter X Tekken, where she is the creator of Pandora, sending the box down to Earth not only as a gift, but as a test for humans over the the conflict that would arise due to its power. In addition she appears in the crossover game Project X Zone 2, where Bison stole one of her hair crests to amplify his Psycho Power. Ingrid is a Support Character in that game. 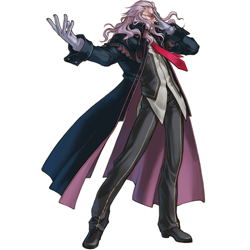 The mysterious antagonist of Capcom Fighting All-Stars, whose true name is Avel. He created a bomb called Laughter Sun, and threatened to destroy Metro City with it. This caused Mayor Mike Haggar to call for help, recruiting Ryu, Chun-Li, Charlie Nash, Alex, Batsu Ichimonju, Akira Kazama, Strider Hiryu and even Poison. Special codes were given to D.D., Luke and Ingrid in order to defuse the bomb. 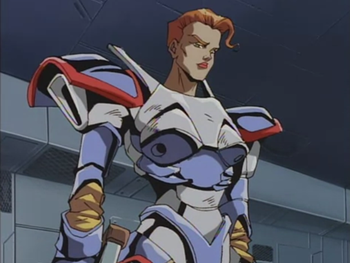 Voiced by: note Lynda Boyd
A character from the cartoon. Satin Hammer was a specialist in cybernetic engineering for the U.S. Government´s Livermore Labs in California, but her theories on robotics were dismissed by highly placed officials in the Pentagon as weak, leading her to harbor resentment towards her superiors.
During her stint with Livermore Labs, Hammer was also dying from a medical condition. Her superiors promised to fund her research in exchange for a new android body; however, she discovered that they only wanted her research for themselves. Once they obtained it, the promised funding was slashed, leaving her a cyborg for the rest of her life. Embittered by this betrayal, Hammer went renegade, and her catastrophic plans lead her to blows with the Street Fighters, especially T. Hawk, who holds feelings for her.
Escher 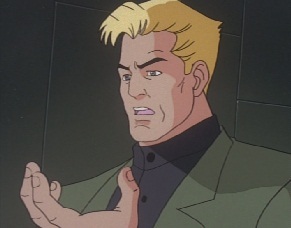 Voiced by: note John Payne
The employer of the Street Fighters. Gives Guile and the others their missions.
The Warrior King 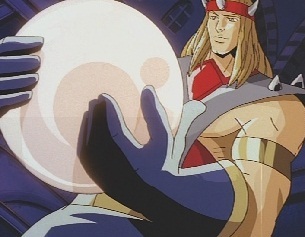 Origin: Warrior's World
Voiced by: note Michael Dorn
A hero from a realm known as Warrior's World. He first appears in the episode of the same name from the Street Fighter animated series in pursuit of a magical Orb needed to save his world. He was invented for a crossover event that USA Network was running at the time, resulting in his appearing in not only the Street Fighter cartoon, but also The Savage Dragon, Mortal Kombat: Defenders of the Realm, and Wing Commander Academy.
Dr. Lucinda "Cindy" Davila 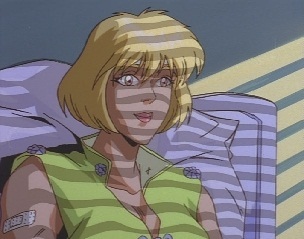 Voiced by: note Kathleen Barr
Guile's former girlfriend, a mix of Hot Scientist and Hospital Hottie who takes the role that the games give to his wife Julia. 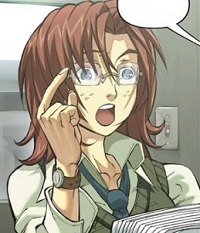 Zen and Singh
Origin: India
Like Sheng Long, Zen is based on an urban legend that became real. During the early stages of Street Fighter V's development, there was a leak that claimed there would be four new characters; Rashid from Africa, Laura from Brazil, Zen from India, and a new boss. Rashid and Laura were proven true (although Rashid was relocated to the Middle East), and the "new boss" could reference either Necalli or F.A.N.G, but Zen never actually existed. One of the Capcom artists noticed the buzz around the non-existent Zen character, and ended up giving him a design, biography, and younger brother.
Zen (ゼン) is a famous Indian actor that is good at fighting, dancing, and singing. His skills and sweet smile captivated women all around the world, and he appears in more than 30 movies per year. He originally worked as a car salesman. As a fighter he can punish scoundrels with anything close to him. He is an old friend of Zangief. According to the Street Fighter V Aprils Fools page, he was the first director of the film The Eternal Ganga (whose poster can be seen in the India stage in SFV).
Singh (シン) is Zen's younger brother, who works as his manager. Originally he was a kushti wrestler, but a foot injury forced him to retire. Although no longer a fighter, he is still strong enough to kill a violent water buffalo with a single strike. He has a sincere and simple personality. He has a good relationship with his brother and is working hard to be in a three-legged race.