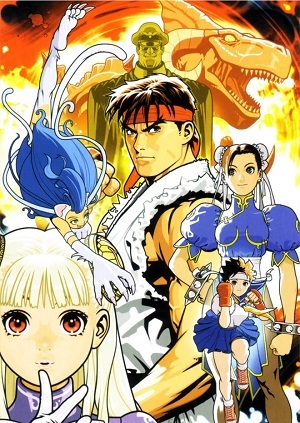 In 2002, Capcom began development on Capcom Fighting All-Stars. All-Stars was a 3D fighting crossover that featured characters from games like Street Fighter II, Darkstalkers, Final Fight, Rival Schools and several new characters. In 2003, the game received limited beta tests in London and Japan. Unfortunately, it poorly handled its Video Game 3D Leap, and the game was canceled that year.

Unlike All-Stars, Evolution is completely 2D. It dropped most of All-Stars' original characters, with the lone exception of a mysterious schoolgirl named Ingrid. Each franchise gets four characters, with Pyron from Darkstalkers serving as the final boss. The game operates on a semi-tag system – while players can't swap in and out during a battle, they can change to their alternate character after a round.