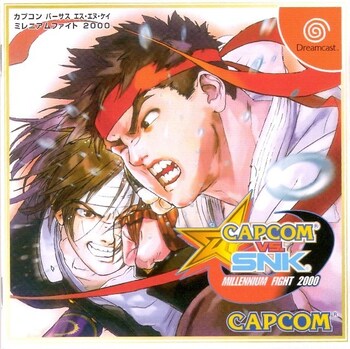 "Now, it's time to have the REAL answer. Who is... THE STRONGEST?!"
Advertisement:

Capcom vs. SNK: Millennium Fight 2000 is the second entry in the SNK vs. Capcom series, part as well of the Capcom vs. series. It was developed by Capcom and released in 2000 for arcades, PlayStation and the Sega Dreamcast.

This game is notorious for containing almost only Street Fighter and The King of Fighters characters:

The gameplay features the use of the Ratio, which gives all the characters a specific rating from 1 to 4, thus determining the amount of places in the team (whose ratio shouldn't be more of 4 as of the combined team) said character would occupy. The game also contains two grooves: SNK's The King of Fighters '94-'98 groove, and Capcom's Street Fighter Alpha one.

An Updated Re-release of this game would follow, called Capcom vs. SNK Pro would contain all these characters unlocked from the start, plus the inclusion of Dan Hibiki and Joe Higashi.