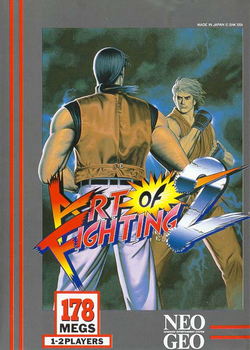 Ryo Sakazaki, to find his kidnapped sister... goes into the dangerous Southtown.
Robert Garcia, a friend, and rival of Ryo goes to Southtown with him.
Who is waiting for them in Southtown?
— Intro cinematic from the first game
Advertisement:

Known in Japan as Ryūko no Ken ("Fist of the Dragon and Tiger"), Art of Fighting is a Fighting Game series by SNK that was released for the Neo Geo arcade and home video game systems. While the last installment of the series appeared in early 1996, several of its characters are still widely popular today and continue to appear in a number of Spin-Off series.

Much of the gameplay of the first two games mimics that of Street Fighter II. The series, however, also came with a few innovations of its own. When special moves were used, an energy gauge under the life gauge, called the "spirit gauge", would deplete. The less power that is in the spirit gauge, the less effective and powerful the special moves are. Taunting (which Art of Fighting is the first Fighting Game to include) is done to drain the opponent's gauge. The gauge can be replenished by holding down one of the buttons, but leave the player open to attack and can be re-depleted and temporarily stopped if the opponent taunts the player.

Art of Fighting was also the first Fighting Game to feature powered-up special moves. The Super Death Blow featured in the first two games is a move done when the spirit/rage gauge is full, but must be learned in a Bonus Stage that appears throughout the games. The Hidden Death Blow, seen in all three games, is a move that can only be done if the spirit gauge is full and the player's life bar is very low and flashing red.

In the first two games, fighters can show facial bruising and torn clothing as the fight progresses. The third game has several prerequisites to finish and humiliate your opponent with Clothing Damage.

The first Art of Fighting takes place in Southtown, where Ryo Sakazaki and Robert Garcia, students of the martial art, Kyokugen Karate, seek to find Ryo's sister, Yuri, who was kidnapped by the crime lord, Mr. Big. The two scoured the city, fighting members of Mr. Big's gang as well as rivals to the Kyokugen Karate dojo, seeking information on Yuri's whereabouts. After Mr. Big is found and defeated, the two face off against Mr. Karate and barely defeat him. Afterwards, Ryo almost kills him before Yuri appears to him and Robert pleading for them to stop. She tells Ryo that Mr. Karate is their father. Though it's not officially confirmed until the second game. In the original arcade version, only Ryo and Robert were playable in story mode with the bosses as hidden characters in versus mode.

The second Art of Fighting takes place a year later. Geese Howard (of Fatal Fury fame) is seen as Southtown's police commissioner. He uses his position as a front for him being a major force in Southtown's criminal underworld, and was directly responsible for Mr. Big kidnapping Yuri. He creates the first King of Fighters fighting tournament, in which all the fighters from the first game enter, except for Ryuhaku Todoh, who is beaten so badly, he goes into self-imposed exile to train. In addition to Geese, three new characters are also introduced, including last game's Damsel in Distress, Yuri. Ryo discovers what Geese had done and defeats him in battle, but Geese escapes and hides out in Japan for a time. Unlike the first game, most of the game's characters are playable in story mode. Mr. Big and Ryo and Yuri's father, Takuma, who were bosses in the last game, are playable characters in this installment. Geese is only playable without hacking or playing with dipswitches in the Japan-only Super Famicom version of the game.

In the third and final Art of Fighting game, Robert goes to search for an old childhood friend, Freia Lawrence, in the small town of Glasshill, Mexico. When Robert goes missing as well, Ryo and the assistant of Robert's parents, Karman Cole, separately go searching for him. Robert finds Freia and discovers that she is being held against her will by Wyler and forced to develop a an elixir created by her and Wyler's fathers. Wyler drinks the elixir when it was finished and becomes a hulk-like monster. The elixir eventually regresses Wyler's mind to a child-like state, and his body weakened and reverted back to its original form. Afterwards, Freia decides to stay in Glasshill and take care of Wyler. Including Karman and Wyler, eight new fighters are introduced into the game, with Robert and Ryo (and Yuri as an NPC) being the only ones from the previous games to return. Wyler and his bodyguard, Sinclair, served as the game's bosses and hidden characters.

An animated TV special was also created; it was based on the plot of the first game.

Characters from Art of Fighting have continued to appear in other video games, most notably The King of Fighters and the SNK vs. Capcom series.

Ask for the trope examples of the series with your power!