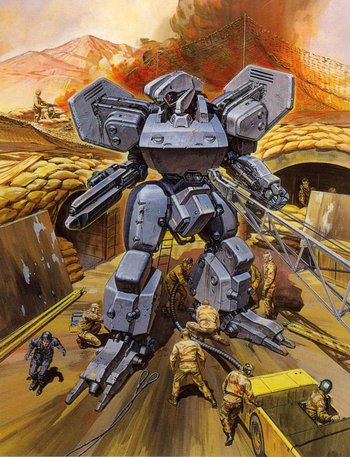 "I fight not for honor or for patriotism. I fight because I am a soldier."
— Jake, Assault Suits Valken / Cybernator
Advertisement:

Assault Suits Valken is a side-scrolling shooter game for the SNES developed by NCS in 1993; the American release by Konami was retitled Cybernator. This game is part of the Assault Suit series and a prequel to Target Earth (known as Assault Suit Leynos in Japan). You play the role of Jake, an assault suit operator in a three-man squad following the exploits of the Versis through the war between the United Pacific States and the Eurasian Union (which is unnamed in the game proper, but whose name is mentioned in additional materials). The English localization in Cybernator is known for scrapping character portraits in dialogue entirely, making it hard to understand the storyline, in addition to removing some scenes (like a character commiting suicide).

Two programmers of this game, Hideo Suzuki and Yukihiro Higuchi, went on to work on Front Mission: Gun Hazard, a spin-off of the Front Mission series that features similar gameplay, making that game a spiritual successor of some sort. The character design was supplied by Satoshi Urushihara of Langrisser fame.

. In an unexpected appearance, Jake and Crea along with the titular Valken join the pilots and Rounders of Senko no Ronde 2 as DLC characters.

Tropes featured in the game are: