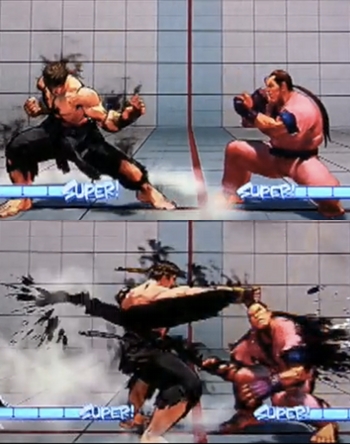 Protip: if your opponent has dark energy radiating from their body, don't block; run. * (Or make a really cheap jab!)
Plate mail, the skin of the chest, the rib cage, the heart — all useless against the mage who can reach directly for the soul.
— Death Grasp

Some characters are defensive powerhouses, like the Barrier Warrior who raises the use of Deflector Shields into an unassailable art form. One popular tactic for dealing with such a formidable defense is to use an attack that their defenses can't block, an Unblockable Attack. It can be a punch, weapon, or spell that if it connects breaks whatever defenses the target has and leaves them reeling. This attack is so powerful that even a perfectly timed Block/Counter-Attack won't work, the only choices the target has are dodging (thus dropping their defense) or preemptively attacking before their assailant finishes their attack.

The Unblockable Attack usually has one or more drawbacks to keep it from being naturally overpowering. It may have a Charged Attack mechanic so the defender can potentially survive either by immediately dodging or jabbing very fast to stop the charge-up. Another limitation is it doesn't usually have a lot of Area of Effect or "splash" damage, giving the target plenty of space to run to in order to avoid getting hit. Similarly it will not be an Always Accurate Attack that can home in on targets wherever they may be and even if they dodge (in fact, an Always Accurate Attack will probably do less damage as a tradeoff). If the unblockable attack lacks these drawbacks it gives the attacker an "Instant Death" Radius that makes the game Nintendo Hard and the opponent akin to a god.

The Unblockable Attack is similar to how a spell with No Saving Throw will No-Sell a target's mystic and mental defenses... provided it hits. The difference is that No Saving Throw attacks can be prevented from hitting by certain defenses, while an Unblockable attack can never be intercepted, only avoided or interrupted.

This works equally well on actual physical defenses like fists, swords and shields, as well as intangible ones like a Beehive Barrier. The Boss Battle is likely to have this, and Mooks probably have attacks like this to make sure the player doesn't spend all the fight just blocking. The Unblockable Attack is usually signaled with a special animation.

In Fighting Games, grapple/throw maneuvers tend to be unblockable as a rule, to encourage a player to use their defenses wisely; it also creates a Tactical Rock–Paper–Scissors where Defend beats Attack, Throw beats Defend, and Attack beats Throw.

345th way to die: Trying to deflect an Ender Charge.

345th way to die: Trying to deflect an Ender Charge.