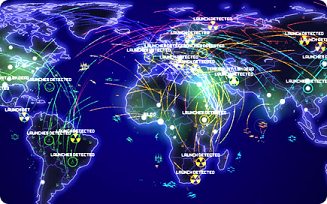 Mutually Assured Destruction (MAD) was the doctrine that nuclear weapons, if deployed against another nuclear power, should be deployed en masse with the objective of completely destroying the other country's capacity to retaliate, and vice versa. In other words, if either the USA or the USSR ever used nuclear weapons against the other, it would be assured that neither the USA nor the USSR would exist anymore. Naturally this assumes both countries have a large enough stockpile to accomplish this - and they did.

The goal of a MAD strategy is counter-intuitive: it is not to win a nuclear war, but actually to prevent one. The theory goes that if each side knows that there is no way it can survive a nuclear war, it will get too scared to start one. Unless one or more of the superpowers decides on Taking You with Me or is ruled by an Omnicidal Maniac, the idea is that knowing that "the only winning move is not to play" will keep either side from escalating matters to the point that mutual destruction becomes inevitable. What happens if someone gains control of nukes who sees the horrible death of themselves and all their subjects as desirable? Well... Let's just hope that never happens.

Related to this is the Game of Chicken, also known as the hawk-dove game or snow-drift game. It is an influential model of conflict for two players in game theory. The principle of the game is that while each player prefers not to yield to the other, the worst possible outcome occurs when both players do not yield. It can also be seen as a form of the Prisoner's Dilemma: If both sides use their weapons, everybody dies; if neither side uses their weapons, everybody lives; but nobody wants to be the only one to put down their weapons and be defenseless.

Needless to say, this theory made people on all sides of the Cold War very nervous. Indeed, before the end of the Cold War, most academics thought the acronym "MAD" was appropriate - the strategy seemed insane.* To be fair, hindsight reveals that most politicians on both sides also thought it was insane, but didn't have any better alternative: nukes were a way of life since the 50's and the genie couldn't be put back in the bottle. This is also why the various nuclear weapon reduction treaties were so contentious and difficult: SALT and START faced the prospect of reducing nuclear stockpiles from "We can kill everything everywhere several times over" to "If we fired our missiles just right, we might win now." It may come up in hypothetical World War III scenarios or works set in the late-era (1980s) of the Cold War. With the fall of the Soviet Union, MAD has lost its value as the focus shifts to combating terrorists who do not have access to a large stockpile of nuclear weapons.

One of the theories for why the Cold War ended as peacefully as it did is that belief in this doctrine prevented the US and USSR from fighting any war directly against each other, for fear it would escalate to nuclear weapons and destroy both powers. Instead, it became a war of ideologies and economics, and according to the victors, the US eventually out-converted and out-spent the Soviets, who then collapsed under the weight of their own system.* This was not too far from the truth, but the reality was that the Soviet system was really good at lying to itself, and their economy had been in the shitter long before the Reagan era arms race. They were doomed either way, but the competition might have sped the process up a little. That particular theory has been put to the test in 1999 when the nuclear powers of India and Pakistan fought a limited shooting war

that somehow did not escalate to the use of nukes. Luckily for us. Unluckily, the nukes did not prevent the shooting in the first place.

Where there is no parity between the two nuclear belligerents, The Moscow Criterion is used. This was developed by the British, who could not build and fire the same number of rockets as the Sovs and who did not trust the Americans to launch their own missiles to back up a MAD doctrine - instead, the aim is to have the ability to slaughter as many of the enemy civilians as possible, thus attaching a prohibitively high human cost to a nuclear release by the more heavily-armed power.

Compare Mutual Kill and Taking You with Me.

In the final scene of "The Butter Battle Book", just as Grandpa Yook is about to drop his Big-Boy Boomeroo, his rival Van Itch appears holding one as well. The Yook grandson can only ask who will drop theirs first, with his grandpa telling him to "be patient", the story ending with the implication that the Yooks and Zooks will experience total destruction.

In the final scene of "The Butter Battle Book", just as Grandpa Yook is about to drop his Big-Boy Boomeroo, his rival Van Itch appears holding one as well. The Yook grandson can only ask who will drop theirs first, with his grandpa telling him to "be patient", the story ending with the implication that the Yooks and Zooks will experience total destruction.