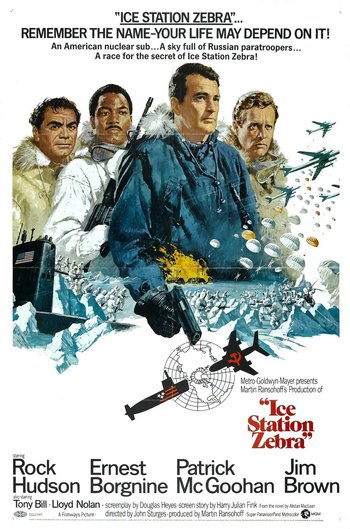 Ice Station Zebra is a 1968 American Cold War espionage thriller directed by John Sturges, adapted from the 1963 novel by Alistair MacLean (which, in turn, fictionalized a real event) with a soundtrack by Michel Legrand. The cast includes Rock Hudson, Ernest Borgnine, Patrick McGoohan, and Jim Brown.

Hudson plays a U.S. Navy submarine captain who is ordered to take his nuclear attack submarine from its base in Scotland up to the Arctic, ostensibly to rescue the crew of the eponymous weather station. On the way, he's ordered to pick up a platoon of Marines and a British Intelligence agent, and quickly learns the real purpose of his mission: to recover a capsule off a Soviet spy satellite.

At the time, the film was considered a workmanlike B-picture thriller and was received with indifference by critics. These days, history buffs are more likely to recognize it as the movie that the the aviator and billionaire tycoon Howard Hughes watched hundreds of times due to his obsessive-compulsive disorder. (As Hughes owned the Las Vegas TV station KLAS, which had Ice Station Zebra in its library, he would call in and force them to play the film on repeat all night.) It's also well-known among fans of The Prisoner (1967), as McGoohan took a break from filming his own series to work on this film, using his pay to keep The Prisoner afloat.