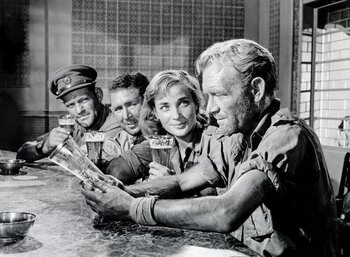 Worth waiting for.
Advertisement:

It's about a bunch of British soldiers trying to outrun the German Afrika Korps in the North African desert in an ambulance after they're cut off from their column in the wake of Rommel's assault. The drama focuses on the interplay among the characters in their struggle to cross the desert alive rather than the war happening around them, although the latter provides an important framing device for their personal struggle.

Possibly the first post-War film in which the Germans were not simply depicted as a faceless and valueless enemy.

"You should never ask a man what he's doing when he takes a shovel into the desert!"