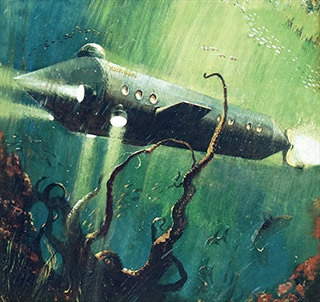 Humanity has been fascinated for a long time with going under the sea and this is epitomised in the Sub Story. Fiction and fact-based drama involving submarines has many advantages to it:

Many of these are During the War, but they don't have to be. Indeed they don't even have to involve the military. They don't even have to be underwater, as Space Is an Ocean means that fictional spaceships will often behave like subs. Films such as The Fantastic Voyage and The Core have recycled Sub Story tropes in more fantastical settings (a man's bloodstream and the Earth's mantle, respectively).

Home of many a Cool Boat with a Badass Crew. Expect at least one Silent Running Mode scene.