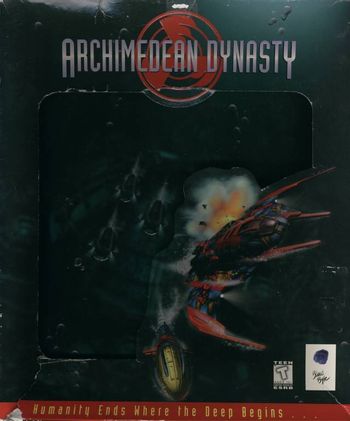 Archimedean Dynasty is a futuristic submarine combat simulation from 1995, created by German developer Massive Entertainment. The game is the predecessor/prequel to their later (and short-lived) Aquanox series. Its original German title was Schleichfahrt ("Silent Running").
Advertisement:

The Back Story goes like this: After World War III, the surface of the earth is heavily irradiated. The only way for humans to survive is to live in underwater stations.

The game takes place in the year 2661. You play as Emerald "Dead Eye" Flint, a mercenary who potentially takes any job as long as it pays well and involves shooting. But because he was ambushed before the game starts, he has to work his way up with a shoddy ship which supports only light weaponry.

The major factions in the world of Aqua are: