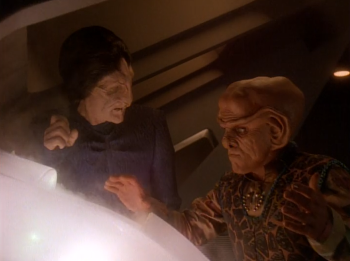 "You just have to reach in and pick one."

The Defiant is meeting with a vessel from the Gamma Quadrant-based Karemma Commerce Ministry regarding a trade dispute with the Federation. It turns out Quark, who was serving as a middleman to avoid drawing attention from the Dominion, has been defrauding the Karemma by levying bogus taxes against them. Their representative, Hanok, has an impressive list to present to Sisko.

Then, without warning, two Jem'Hadar warships appear, no doubt angry to find the Karemma talking with Starfleet. The panicked Karemma crew take their ship into a nearby gas giant. The Jem'Hadar follow, pursued in turn by the Defiant, which begins a game of cat and mouse as the ships attempt to hunt each other in the hostile atmosphere where sensors barely function.

Hanok leaves things to the professionals and has a chat with his erstwhile business partner. Failing a transparent attempt to pin the blame on his brother, Quark is told in no uncertain terms that he is a liar and a cheat who will never be allowed to do business in the Gamma Quadrant again.

Hanok: You cheated me, Quark, and you haven't even got the courage to admit it.

The Defiant searches the area using an improvised form of sonar, but an ambush by the Jem'Hadar leaves the ship badly damaged and sinking into the crushing atmosphere. Dax manages to get the engines back online, but a hull breach traps her and Bashir on deck 2.

Phasers are offline, so Sisko orders engineering to refit the ship's two atmospheric probes with torpedo warheads. At their next encounter, one of the probes succeeds in destroying an enemy ship, but not before it inflicts even more damage. The bridge is damaged beyond repair and Sisko receives a severe concussion, so Worf takes command in engineering.

Kira stays behind to care for Sisko, but without Bashir, all she can do is talk to him to keep him from falling comatose. She realizes, after a time, that all she can talk about are boring shift schedules, since they have no relationship outside of work. She admits that his religious significance makes him hard to be comfortable around, though she is clearly pleased when Sisko then asks her to tell him a story.

In the mess hall, Quark has wasted no time trying to sweet talk his way back into Hanok's good graces, contrasting the challenge and excitement of his adversarial business methods against the Karemma's fair but boring approach. Their debate is interrupted when a would-be fatal torpedo suddenly strikes the hull... but miraculously fails to detonate. It hums angrily, jutting out of the wall.

Hanok: I suggest we leave this room immediately.
Quark: And go where? If that thing explodes the entire ship will be destroyed.

The pair decide they must disarm the torpedo. Hanok recognizes the torpedo as a model sold by his people, and even remembers that one of two diodes inside can be removed to defuse it... but he doesn't remember which one. Quark makes things easy and pulls one out at random, nearly giving Hanok a heart attack, but the two are still alive.

Hanok: That was... exciting.
Quark: Feels good, doesn't it?

Worf devises a trap for the remaining Jem'Hadar ship. Using the second probe as a lure, they ambush and destroy them using the deflector as a jury-rigged phaser emitter. With no more threats to evade, the crew are free to put things back in order. Dax and Bashir are rescued, Sisko receives proper treatment, and the Karemma ship is found and rescued.

Back on the station, Odo finds Hanok happily spinning the dabo wheel with Quark, enjoying his newfound appreciation for gambling (but without the explosive ordnance). With the work day coming to a close, Sisko decides to invite Kira to a baseball game on the holosuite, which she happily accepts.

Sisko: You can get the hot dogs from Quark.
Kira: Hot dogs?
Sisko: Oh, he'll know.

The Karemma view of pricing

"Starship Down". The Karemma price their products in a non-market manner: rather than charge whatever they can get away with, they set a predetermined profit margin, plus expenses.

The Karemma view of pricing

"Starship Down". The Karemma price their products in a non-market manner: rather than charge whatever they can get away with, they set a predetermined profit margin, plus expenses.