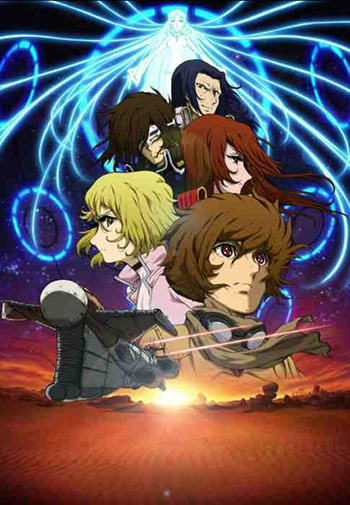 Space pirates... in the sand!
Advertisement:

Ozuma aka OZMA is a 2012 anime by Leiji Matsumoto based on a concept he wrote back in The '80s.

Ozuma takes place in a future Earth where, due to an increase in temperature of the Sun, the Earth as we know it has dried up and turned into a harsh desert planet. The story follows Sam Coin, a young man that's part of a rag-tag band of sand pirates who dreams of one day catching an "Ozma": one of the legendary giant sand-whales. Along the way, he meets up with the mysterious Maya who's being chased by Theseus army. His act of rescuing her and bringing her onto their ship starts them on an adventure involving fanatical governments, pirates, cool ships and an earth shattering mystery - in other words, it's a typical Matsumoto story, except that it's set on a desert planet instead of in space.

Where series fits in the (or if it is even part of) Leiji Verse is as of yet unknown.