Anime / Origin: Spirits of the Past 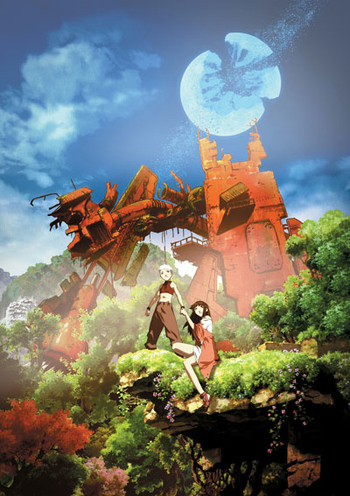 Origin: Spirits of the Past is a 2006 anime film produced by GONZO. It is directed by Keiichi Sugiyama and written by Nana Shiina and Naoko Kakimoto from a story by Umanosuke Iida.

Agito (voiced by Ryo Katsuji) awakens Toola (Aoi Miyazaki) from cryogenic sleep. Toola has some adjusting to do, as a science experiment Gone Horribly Wrong has left the moon a bit less intact than it used to be, has turned plants into destructive forces of nature, and has made water a bit scarce. As she's attempting to adjust to her new life, Shunack (Kenichi Endō), another former cryogenic sleeper, arrives.

Shunack informs Toola that there's a way to return things to the way they were before. Toola, not coping with the murderous forest and other changes well, agrees to leave with him. Agito doesn't think this is a good idea, and the forest and its representatives agree with him. Agito is enhanced with some of the forest's energy so he can stand up to Shunack and the legion of soldiers and Humongous Mecha under his command. As this goes on Toola starts seeing glimpses of just how militant Shunack can be, and starts to figure out that putting things back to "normal" is going to cause a lot more destruction than she thought.