Earth That Used to Be Better 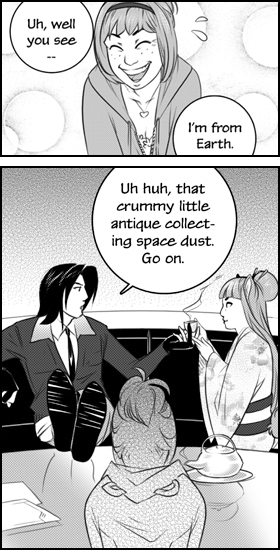 Back in my day...
Advertisement:

Earth just isn't what it used to be, running low on resources and living space, and humanity has started to move out in a significant way. There's at least a genetically stable offworld population in the Colonized Solar System or elsewhere, but plenty still live on the planet. Contact is maintained, but the planet is generally implied or stated to have downgraded, sometimes significantly, in health from today. Essentially, it's become an Insignificant Little Blue Planet even by the standards of human society. The two variables are what percentage of total humanity is offworld and what the standard of living is for the remaining peoples, both of them related to how far down the road from now the story is. Sometimes they take place after the low point, when Earth has undergone some healing but still bears scars on the land or in memories. The important things are that the planet is measurably worse off (even if only by our increased numbers) and no longer home to the only viable population of humanity.

A pervasive idea in this trope is that, once space colonization became possible, the best and the brightest will leave Earth for the colonies, leaving behind the dregs of humanity. A common thread in that idea is that said dregs are passive enough to submit to absurd amounts of regulation — many such Earths are ruled by a highly restrictive and bureaucratized one-world state. The idea that colonists are "the best", as opposed to being, say, malcontents and exiles — or even that the malcontents and exiles are "the best" — and that non-colonists are passive in the face of amoral authority are notions mostly put forth by Americans, for obvious reasons. Combine the two aforementioned ideas, and one can easily find stories that serve as a Roman à Clef for how Americans see Europe, with an extrasolar colony that serves as a free, prosperous United Space of America versus an Earth that represents everything that the author doesn't like about Europe. Of course, it's entirely possible that the colonists and the Earthopeans will each have their prejudices against the others.

Sometimes goes hand in hand with Gaia's Lament. Occasionally prone to starting The War of Earthly Aggression out of jealousy or selfishness. May become Earth That Was.