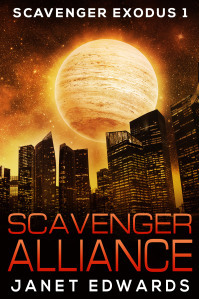 Scavenger Alliance is a 2017 Young Adult Science Fiction novel written by Janet Edwards. It is the first of a prequel series set in the same universe as Earth Girl, taking place in 2408 during the Exodus Century and starring Blaze Donnelly, a distant ancestor of Jarra's. The second book, Scavenger Blood, was released in 2019 and a third book is planned.
Advertisement:

2408. Humanity has travelled to the stars through interstellar portals, but the rebels and criminals were left behind on a ruined Earth. Eighteen-year-old Blaze is one of the last seven hundred people scavenging a living in an increasingly lethal New York. Her mother died six years ago. Her brother turned traitor. She believes her father is Donnell, the leader of the uneasy alliance between the remnants of the Earth Resistance and the old criminal gangs. She’s not sure what Donnell believes because he’s barely spoken to her since her brother betrayed him.

Blaze has survived this long by being too unimportant to kill, but now the alliance is on the brink of starvation, and an old enemy is trying to seize power. When an aircraft carrying three privileged off-worlders crashes in New York, it adds more fuel to an already explosive situation, and Blaze is forced to step into the spotlight. Can the traitor’s sister convince Donnell, the warring divisions, and the off-worlders to work together to leave the death trap of New York? Blaze thinks that failure will mean the death of everyone she knows, but then she discovers the off-worlders’ secret. The stakes are far higher than just seven hundred lives.