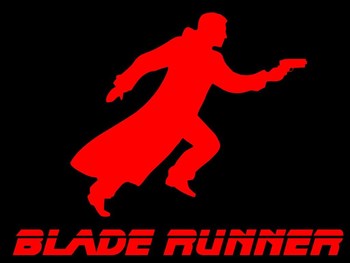 Blade Runner is a neo-noir science fiction franchise that started in 1982 with the release of Blade Runner, which was loosely based on the 1968 novel Do Androids Dream of Electric Sheep? by Philip K. Dick. While the film performed modestly at the box office, it ascended to Cult Classic and remains an influential work of the Cyberpunk genre, and left enough of a cultural mark to get a sequel more than three decades later.

The setting is a dystopian 21st century Los Angeles, and the stories involve Artificial Humans, the Replicants, who were invented to perform tasks deemed too dangerous or undignifying for humans, especially in deep space. Some of them develop personalities of their own and struggle to break free from servitude as a result, and a special police force, the Blade Runners, is tasked to track them down and "retire" them, as they have no right to roam free on Earth.

Works in the franchise: