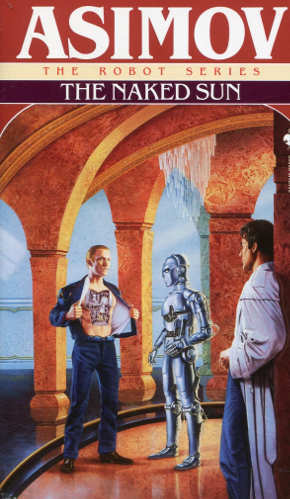 The Naked Sun is a 1957 Science Fiction and Crime Fiction Novel by Isaac Asimov, the second of his "Robot Trilogy".

Elijah "Lije" Baley, freshly promoted from his previous successful case in The Caves of Steel, is contracted, by political machinations far above his pay grade, to investigate a murder on one of the "Spacer" Worlds — Solaria, the richest, most sparsely populated, and most robotically advanced of them all. This makes it, of course, the absolute opposite of the overpopulated, crowded, technologically backward Earth of his exclusive experience. On Solaria, humans are thoroughly outnumbered by their robot servants, to the point where every individual person has an estate of hundreds or thousands of square miles, maintained entirely by robots, on which they are the only inhabitant, with the possible exception of a spouse. Even in cases of marriage, Solarians consider it all but inconceivable to come into the presence of another human being for any purpose besides prearranged and socially-mandated acts of procreation. Along with his agoraphobia, this is one of the major barriers to Lije's investigation.

The victim is Rikaine Delmarre, a well-respected but not well-liked native Solarian. The only suspect is his beautiful wife, Gladia, who maintains her innocence despite having been the only person within hundreds of miles at the time of the murder. Lije is assisted for a second time by R. Daneel Olivaw. (The "R" stands for "Robot".) He's fully humanoid and despite the Solarians' expertise with robots, able to conceal his robotic nature completely. Lije deals with uncooperative authorities, assassination attempts on him and his witnesses, and a world completely different from his own as he attempts to solve the mystery.

The book was adapted into a Soviet TV movie in 1978, under the name of The Last Alternative. Unfortunately, since it uses an already censored translation, and then cuts out large pieces not caring about the resulting plot holes, the result is less than optimal.