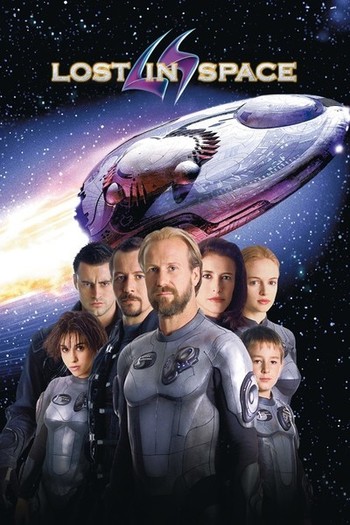 John Robinson: This database has starmaps of all the known galaxy.
Major West: I don't recognize a single system.
Penny Robinson: We're lost...aren't we?
Advertisement:

Lost in Space (1998) is a science fiction film adaptation of the 1965-68 television series of the same name. It was directed by Stephen Hopkins and stars William Hurt and Gary Oldman.

In the not-too-distant future, Earth will soon be rendered uninhabitable due to extensive, irreversible harm from pollution. The United Global Space Force plans to colonize a distant planet so that Earth's population can relocate. Unbeknownst to them, a terrorist organization called the Global Sedition plans to disrupt the USGF's plans in order to take over the same planet themselves.

Professor John Robinson, the head scientist of the Jupiter mission, plans to take his family on a ten-year space mission in suspended animation to the nearby planet Alpha Prime to build a companion hypergate to the one near Earth. Shortly after launch, however, their voyage is sabotaged, forcing them to take desperate measures to avoid plunging into the sun. One random hyperjump later, The Robinsons and their unwilling stowaway Dr. Smith are the sort of lost that only comes when you have an entire galaxy to get lost in.