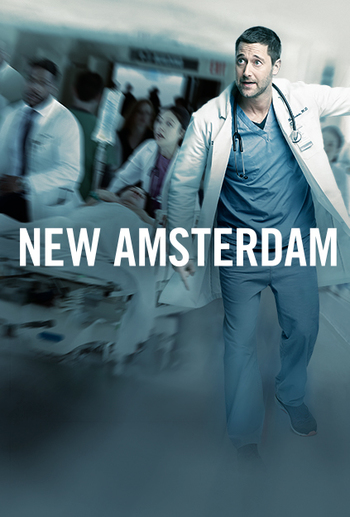 Break the Rules. Heal the System.
"You know, we all feel like the system...is too big to change, but guess what? We are the system, and we need to change. So just tell me what you need, what your patients need, and I don't care if it's not covered, I don't care if the board said no, let's get into some trouble. Let's be...doctors again."'
—Max Goodwin in his Establishing Character Moment
Advertisement:

New Amsterdam is an NBC Medical Drama that premiered in 2018. It is based on the book Twelve Patients - Life and Death at Bellevue Hospital by Eric Manheimer.

Dr. Max Goodwin is the new medical director of New Amsterdam Medical Center, a major public hospital that provides care to the general public, prison inmates, and even UN diplomats. From the moment he arrives, Goodwin has grand ideas to make sure New Amsterdam can provide proper medical treatment to every patient who comes through its doors, regardless of cost, and makes clear he doesn't care who he has to steamroll to make this happen. This is met with a mixture of excitement, curiosity, and derision by the staff.

In January of 2020, NBC announced that the show was renewed for three additional seasons.

Not to be confused with New Amsterdam (2008), a police procedural about an immortal detective searching for his true love.