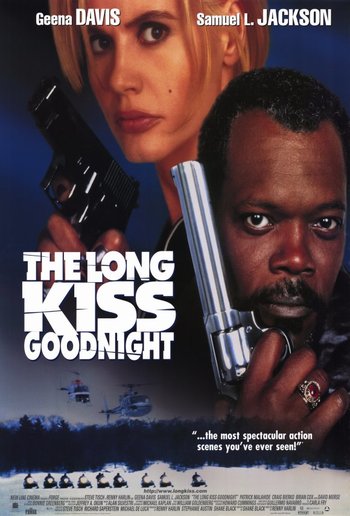 The Long Kiss Goodnight is a 1996 spy/comedy/action film directed by Renny Harlin and written by Shane Black.

Samantha Caine (Geena Davis) knows nothing about her past. She had been found eight years ago on a beach, pregnant and injured, but remembers nothing of her former life. Since then she has given birth to her daughter, Caitlin (Yvonne Zima), and met a very nice man. For a while she hired a few private investigators, including Mitch Hennessey (Samuel L. Jackson), but they never came up with anything. She has been living a peaceful, idyllic life working as a schoolteacher and raising her daughter, and has pretty much decided to give her former, unknown life the "long kiss goodnight".

One Christmas season, she plays the part of Mrs. Claus in her town's Christmas parade. An inmate in prison is shocked to see her on television, alive, and breaks out.

Meanwhile, Samantha is in a freak auto accident, injuring her head. After she recovers she discovers as she cuts carrots one night that she has an unexpected skill with knives and assumes she must have been a chef in her past life. She could not be more wrong...