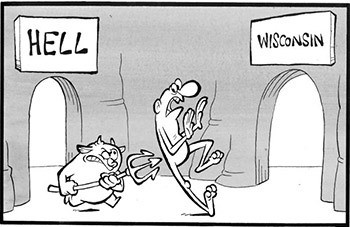 There are a few places in this world that nobody ever wants to go to. Not that it's immediately dangerous, like Hell. But its reputation is so bad that being sent there is a Cool and Unusual Punishment. The threat of sending someone there can function as a Cut His Heart Out with a Spoon threat. And willingly going there is an act of extreme bravery, insanity, and/or desperation. In a fantasy setting, there is a good chance your character will go there, for whatever reason (most likely because of The Law of Conservation of Detail).

Of course, sometimes this is merely a throwaway gag. I mean, who would want to actually go there?

See also Hell, Room 101, Maximum Fun Chamber, I Don't Like the Sound of That Place, Forbidden Zone, and Death World. See also You Would Not Want to Live in Dex and Reassigned to Antarctica.