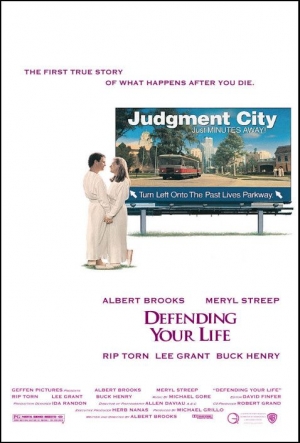 Daniel Miller (Brooks) dies in a car wreck and finds himself in a very Earth-like purgatory called Judgment City. Here, he is given a defense attorney, Bob Diamond (Rip Torn), who informs him that he will have to defend Daniel's life by presenting Daniel's past in a trial over whether or not Daniel can Ascend to a Higher Plane of Existence or if he should be sent back to face his fears. Daniel then meets Julia (Streep), who led a loving and fulfilling life, but died an untimely death. Julia and Daniel quickly hit it off, but while Daniel asserts he has no more fears and he's ready to move on, his romance with Julia begins raising some doubts...