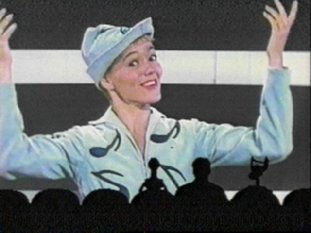 "Knew your father, I did!"note "Hey, leave my father outta this!"
Advertisement:

Film watched: War of the Colossal Beast with short Mr. B Natural

What makes Mr. B Natural notorious as the Worst MST3K Short Ever is that Mister B Natural, "the spirit of music", is played by a woman. An extremely perky woman. With a voice that could break glass. In a costume that makes absolutely no attempt to obscure her sex. All this makes the short... disturbing. Unless of course you like that sort of thing.

Notably, one of the rewards for backing RiffTrax's Kickstarter for the live riff of Starship Troopers was a new riff of the full 30-minute short, with new jokes and material.

This episode is available on Shout! Factory TV here

The MST3K presentation of Mr. B Natural contains examples of:

The MST3K presentation of War of the Colossal Beast contains examples of:

[Mr. B prances around]