Brazil was colonized by Portugal, and so most Brazilians speak Portuguese, unlike the rest of Latin America, which mostly speaks Spanish — though there is a Spanish-speaking minority (way less than 1%) in the west and south, and Spanish is taught at schools (as well as English).

Brazil is one of only two countries in the Americas that was once a sovereign monarchy (the other being Mexico). Today it is a republic.

Brazil's modern population descends from a mix of Portuguese colonists, African slaves, and Native Americans, plus immigrants from Europe, Middle East and Japan. Although it isn't very well known, Brazil is home to the largest ethnic Japanese population in the world outside Japan itself, and the 19th century saw the settlement of many immigrants from Germany and Italy in the southeastern/southern states, where to this day there's still a lot of German and Italian influence in the culture and architecture, with people occasionally speaking dialects on the streets, especially in the smaller towns.

What is the capital of Brazil?

The capital of Brazil is not Buenos Aires. It is not Rio de Janeiro either, but it used to be before 1960; it has been Brasília since 1960 — a planned city built specifically for this purpose. There are about ten major political parties in Brazil, with PSDB (nominally social democrats), PT (nominally labour) and PMDB (unabashed populists) being the largest and more important. All of them have been involved in political scandals of all sorts, and no wonder; the political system tends to lead very easily to corruption. This is because all sorts of high-ranking jobs in the government are directly or indirectly nominated by politicians, with the nominees tending to 'share' their gains with those who put them there. To make things worse, the people who nominate are usually power-brokers in either chamber of Congress, who themselves can only be tried by Brazil's highest court and/or their peers. Combine this with inefficient oversight from the judiciary branch directly responsible for monitoring government spendingnote the TCU, the members of which are directly nominated by the same politicians they monitor, all sorts of problems with the police, the absurdly long time (i.e., more than a decade) for the judiciary to finish trying a casenote in no small part due to the amazing number of appeals anyone can make, it being not rare at all for a mundane case to reach the Supreme Court, and other problems, and the results are plain to see.

But one tip though: despite most Brazilians acknowledging all this, they tend to be a little defensive towards outside criticism, in part due to the perception that such criticism may be masking "imperialistic intentions".note This perception does have some historical basis as the military coup in Brazil in 1964 and the horrid dictatorship that followed did receive tacit support from the US government, although the level of direct intervention never reached that in Central America countries. And, to be fair, not all politicians are bad and, after decades of severe problems, Brazil was finally enjoying a good period up to 2016, thanks mainly to the successive PSDB and PT governments since 1994 not screwing up too badly. Recently, the president suffered an Impeachment, which several people consider groundless and refer to it as a Coup, while some consider it fair based on fiscal responsibility crimes the former president supposedly commited. It finally culminated in the 2018 Presidential election which placed a controversial far-right candidate in power. This debate is very long and very polarizing for the Brazilian populace.

Like most other Latin American states, Brazil is officially a secular state, and Roman Catholicism is the predominant religion (many non-practitioners merely declare themselves Catholic), with a growing Protestant neo-Pentecostal (Evangelical) population. Particularly in the northeastern states, various syncretic religions which mix Roman Catholic saints and African deities are also practiced, including candomblé and umbanda. Spiritualism and Judaism are minority faiths, but not that uncommon. Atheists and agnostics are also minorities, but seem to be growing. According to the 2010 census, Brazilian population was composed of roman catholics (64,6%), protestants (22,2%), non-religious people (8%), spiritists (2%) and others (3%) by then.

Brazilian television consists of seven main open networks; (Globo, RecordTV, Band, Cultura, SBT, RedeTV!, Gazeta) one state-run public channel (TV Brasil) and many minor networks, cable TV is also available, for a fee, and lots of people pirate it. The most popular shows are daily telenovelasnote not soap operas as many English-speaking Brazilians tend to translate; they don't quite have the same format, news, variety shows (run non-stop at weekends, and very frequent in weekday afternoons), (previously) football (soccer) matches (twice a week at least, on Wednesday night and Sunday afternoon), Jerry Springer clones (which have become less common over the years), and the occasional reality show. Popular presenters will often get two, three or four-hour weekly shows. Weekly serials in the popular American format are rare. Cartoons are seen as kid stuff, but were frequently aired in the mornings (sometimes being dubbed anime); by-and-large they had been phased out of open TV channels' programming, with only one channel, SBT (Sistema Brasileiro de Televisãonote Brazilian Television System), still broadcasting them with relative regularity.

Brazilian literature and cinema is practically devoid of the fantasy genre, and is mostly composed of dramas and comedies centered on one of Brazil's major cities (São Paulo, Rio de Janeiro, Belo Horizonte, Salvador). Magical Realism is common, and very popular in the local telenovelas. Also popular in telenovelas are stereotyped versions of foreign countries for some extra exoticism in the plot. This has began to change as Globo made fantasy-themed telenovelas that follow popular series such as Game of Thrones, while Evangelist-controlled network RecordTV has produced big-budget Biblical-themed shows to rival them.

Brazil's climate is quite varied.

Most of its territory is in the tropics, which means there are no clear Equinoxes and Solstices. The northern half of the country can be roughly considered to be warm year-round. The southern half sees Winter and Summer only as a difference in temperature (and rainfall), as deciduous

trees are an underwhelming minority of the everyday vegetation (even though most trees do look like deciduous trees — in summer, that is). Yearly temperature variation is usually limited; in southern urban areas, temperatures usually vary by about 35°C (2°C~37°C). Sub-zero temperatures are extremely localized and brief, and snow flurries are even more so and very much newsworthy. Keep in mind this is a country with no mountains to speak of.

Brazil is famous for:

Brazilian law is alternately liberal and conservative: the death penalty is unconstitutional (except during warfare), but abortions are restricted; gun possession is heavily regulated note Though a thriving black market keeps local drug cartels and criminal empires supplied with all kinds of heavy weaponry, and the country has the single highest rate of firearm homicides per year; same-sex marriage was legalized in 2013; and you get to go to special (much less screwed up) prisons if you've got a college degree. Laws in Brazil change very slowly, as they have to move their way through Congress like molasses running uphill in July (which, of course, is winter in Brazilnote Well, most of Brazil. But the parts where it's technically summer are equatorial and really don't count.). Also, while Brazil is a federal republic much like the US, the states have much more limited legislative powers. Brazil is mostly a civil law country, unlike the US. Interpretation of the law or judicial custom is not binding; only a few decisions made by the constitutional court are.

Brazilian works in this wiki: 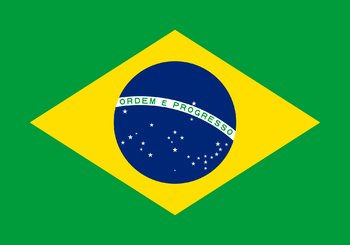 The green field and yellow rhombus were retained from the 1822 flag of the Brazilian Empire, and respectively represented the Houses of Bragança and Habsburg, the ancestral lineages of Dom Pedro I and his wife Maria Leopoldina. Following Brazil's transition into a republic in 1889, the aforementioned elements were retained while the royal arms at the center were replaced with a blue circle littered with 27 stars—each representing a specific state plus the Federal District—arranged to resemble the starry array as it would have appeared over the skies of Rio de Janeiro on the morning of 15 November 1889, the moment Brazil was declared a republic; streaking across the sky is the positivist motto "Ordem e Progresso" (Portuguese, "Order and Progress").
Coat of arms of Brazil 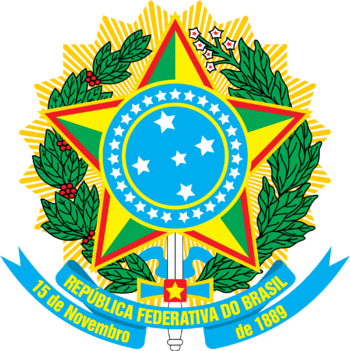 Hino Nacional Brasileiro is the national anthem of the Federative Republic of Brazil.

Hino Nacional Brasileiro is the national anthem of the Federative Republic of Brazil.