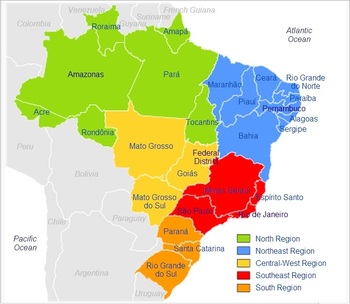 Brazil is the largest Portuguese-speaking country in the world, as well as the largest country in both South America and Latin America. It's composed of 27 Federative Units, meaning 26 states and one federal district (think of it like the US States and Washington D.C.). These states are further categorized into five regions: the Central-West Region (which also contains the Federal District), the Southeast Region, the South Region, the Northeast Region, and the North Region. The majority of the population lives in the Southeast Region, while the Amazon Rainforest takes up the majority of the North Region.

The capital of Brazil, but curiously not the original one (that honor goes to Rio de Janeiro) as it was built in the 50s and inaugurated in the 60s by the government in a effort to encourage the population of moving inwards since most Brazilians lived along the coastal line. Its the smallest state in the country measuring 5,802 km2 and it has a tropical savanna climate because of its geographical location.