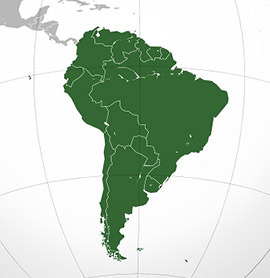 One of the two continents composing the Americas, and the southern of the two. Known as the home of many top Football teams and players, as well as the origin of many popular fruits and vegetables worldwide like cashews, pineapples, potatoes and tomatoes, South America is composed of 12 countries, the majority of them being Spanish speaking countries (with the exceptions of Brazil, Guyana and Suriname, who speak Portuguese, English and Dutch, respectively), but with many different and unique cultures, and 3 dependencies. It was also the home of the Incas. The continent (except for the Falkland Islands, South Georgia and the South Sandwich Islands, Guyana and Suriname) is sometimes merged with Mexico, the Spanish and French speaking countries of the Caribbean and Central America (except Belize) as Latin America, and is sometimes merged with North America as The Americas, primarily in countries that speak the romance languages (French, Spanish, Italian, Romanian, Portuguese) and Greece. 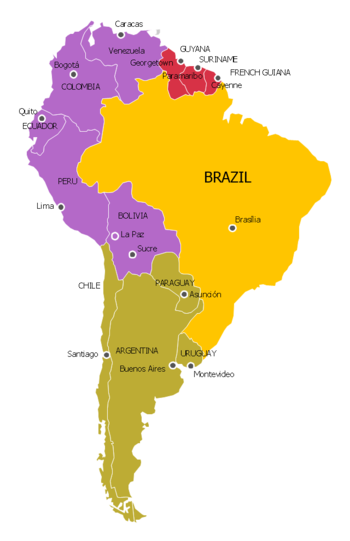 Defunct countries, states, and other entities

See Brazil for everything solely related to Brazil

See Argentina for everything solely related to Argentina

See Colombia, Peru and Venezuela for everything solely related to those countries

See Guyana for everything solely related to Guyana