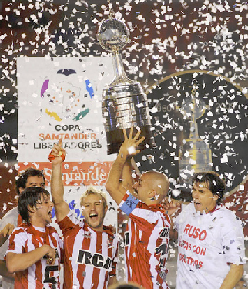 Weeeee are the chaaaampions, my friends!note Pictured: Estudiantes de La Plata (Argentina) lifting the trophy for the 2009 edition.
Advertisement:

is the most important football competition in South America, and acts as that region's counterpart to Europe's UEFA Champions League. It's a tournament which has been held yearly since 1960. The clubs disputing this title are mostly home-grown, showcasing some of the continent's most talented players.

The tournament is played by teams from the countries who make up CONMEBOLnote Short for Confederación Sudamericana de Fútbol, South American Football Confederation (Argentina, Bolivia, Brazil, Chile, Colombia, Ecuador, Paraguay, Peru, Uruguay and Venezuela) plus, between 1998 and 2016, teams invited from the Mexican league.note Who weren't given the right to participate from the World Club Championship representing South America (and thereby gaining a chance to give one of the European giants a black eye, as São Paulo did to Liverpool in 2005, Internacional to Barcelona in 2006 and Corinthians to Chelsea in 2012) in case of winning the tournament, since the country is a member of CONCACAF and their participation was invitational. They, however, can play said cup by winning the similar CONCACAF event. It has three stages: a preliminary round, then a group stage, then the final knockout phase. Not all the teams have to pass through all those phases, though; the top teams from the top leagues don't have to pass through the preliminary round. The group stage consists of eight groups of four teams (32 clubs in total), each team playing the others in home and away matches with the two top advancing to the knockout phase, which is also played over two legs.

For those who get the chance to compete in it, it offers a good amount of prize money and TV exposure and is the pinnacle of club competition outside of Europe. It showcases some of the finest football in the world and definitely has some of the most epic games you could ask for. The competition has been dominated mostly by "Atlantic" teams (i.e., teams from Uruguay, Argentina and Brazil) since it started, with Independiente having won it a record seven times in their history. However clubs in the "Pacific" have lifted the prestigious trophy at times, the only exceptions being Bolivia, Peru and Venezuela who have yet to produce any champion team in this specific tournamentnote Peru has Cienciano, who won the lesser counterpart to this tournament, the Copa Sudamericana, in 2003.

It ranks as one of the most popular sporting events in the world, gaining the attention of 135 countries around the world. It's one of the most important dates in a football fan's calendar. Despite not being as glamorous as the Champions League, it usually provides more excitement due to harsher conditions (extended travel, the altitude sickness playing in Mexico and the Andes, less than acceptable grass...) and the Hot-Blooded Latinos expressing themselves in both lively crowds and aggressive players.