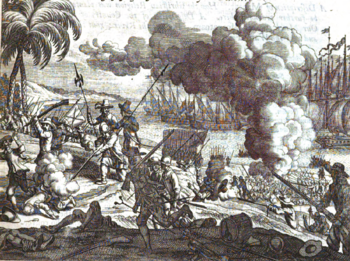 The Dutch-Portuguese War (1602-1640) was a conflict resulting from Dutch companies (most of which the Dutch government had a large stake in) invading and impinging on Portuguese land and colonies in the Americas, Africa, India and the Far East. Related to The Eighty Years' War by virtue of Portugal's Personal Union with Burgundy, Castile, Aragon, The Two Sicilies, etc, etc, under the King Philip III Habsburg of Castile, the conflict served as a means for the Dutch Republic to gain more land. Perhaps their greatest ambition was to gain a foothold in the New World, the gold-producing regions of modern-day northern Brazil. English and Scots forces (then in a Personal Union under the Stuarts) also assisted the Dutch unofficially and off-the-books as volunteers and mercenaries at various points during the war.

Though initially successful in their endeavors, shifting alliances and reinforcement lines eventually allowed the Portuguese to repel the Dutch in Brazil. Similarly, the Dutch were repelled from Africa where they met with equally little success overall. With their interests at stake the Dutch eventually looked to bargain for peace in order to retain whatever possible in Brazil and Africa.

However, it was a watershed mark that indicated the beginnings of the decline of the first European Colonial Empire (remember that this war lasted almost the entirety of the Iberian Union period, where Portugal was under control of Spain), as the strains of the war bled the shipping and trade Portugal so depended on and saw an entire quarter of their Empire in Asia fall away, marking the true birth of a Dutch Empire.

This war in fiction: