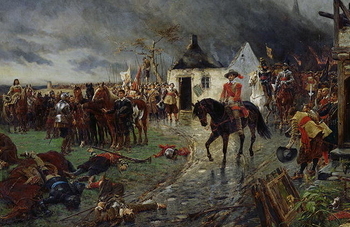 Massive European war raging from 1618 to 1648 (although the French continued fighting the Spanish for a bit longer), involving, directly or indirectly, just about every European power in some fashion. It is usually considered to be the longest recorded continuous war (The Hundred Years War had a couple of interruptions, as did The Eighty Years' War), and in its time was one of the bloodiest wars recorded in history. It was mainly (though not exclusively) fought within the Holy Roman Empire. It was devastating to the Empire: Most estimates suggest one third of Germans died in the war.

Its start is usually fixed on the (third) Defenestration of Prague, an event in which a throng of rebellious Bohemian Protestants forced their way into Prague Castle and, after a symbolical trial, threw two Catholic Imperial governors and their secretary from a third-storey window. They survived badly bruised, their fall having been cushioned by either angels led by St. Mary (Catholic propaganda), a heap of horse manure (Protestant propaganda), or neither of the two, because it wasn't a particularly high window (modern historians).

The causes of the war are complex, and considering the numerous participants arguably unique to each one of them. The basic conflict involved tensions between Protestants and Catholics inside the Holy Roman Empire, which had been building up since The Protestant Reformation, tensions between the emperor and his princes (Protestant and Catholic), tensions between the Czechs and the Germans within The Empire, the old French-Habsburg rivalry, Danish-Swedish rivalry, the Spanish conflict with the Dutch, the Spanish conflict with the Portuguese (who succesfully revolted against Spanish rule with French encouragement/help), and Swedish designs on the Baltic.

All of these things flowed together to create a 30-year-long clusterfuck in which the sides were not always clearly marked, with certain factions frequently changing sides or essentially blackmailing their "allies" as the situation seemed to shift to their own advantage. The only major Western/Northern European areas this conflict didn't really touch were Britain and Ireland, whose island status let them mostly sit this one out and intervene only when they felt like it—though they eventually became too busy killing each other to intervene at all. The three decades of war are considered to be very important because of the military, social and economic development that it accelerated: Armies in this period became even larger than they had been during the Habsburg-Valois and Habsburg-Ottoman and Religious Wars of the 16th Century, and new tactics were tried out that would eventually become important.

The war itself is considered to have been exceptionally destructive, killing off as much as 1/3 of the population of the Holy Roman Empire — not through fighting, though, so much as causing artificial famines with the giant and marauding standing armies' need to continually steal hundreds of tons of food daily from the surrounding landscape to sustain themselves. Worse, the indecisive and back-and-forth nature of the war meant that the same areas (given their economic and/or strategic importance) were raided again and again and again (whereas others remained totally untouched), as the page quote attests. The primary causes of death during the war were thus beriberi, measles, tuberculosis, smallpox, and the common cold.

Some historians argue that, even compared to the wars of the twentieth century, it remains the most destructive war in European history in terms of its proportionate death toll and the degree of economic damage and social mayhem relative to the state of society before it. The unprecedented level of destruction stemmed from the way the war was fought continuously and entirely by very large mercenary armies operating without supply lines. Mercenaries were used so exclusively because the new, more effective gunpowder weapons (particularly the flintlock musket) in combination with the perfection of the pike-and-shot systemnote Pikes and other forms of "pointy stick" warfare were not yet obsolete at this point in time. That only came with the discovery of a way to turn a musket into a pointy stick—the bayonet—which only became widespread in the last quarter of the 17th century, long after the end of this particular war. For details, see the Analysis page for Fantasy Gun Control. had made the old knight-based model of warfare obsolete nearly two hundred years ago by this point, and yet nobody had figured out the modern model of professional armies yet.note Gunpowder weapons had existed in Europe since at least the 15th century; however, actual gunpowder weapons and tactics had changed dramatically. Technically, Niccolò Machiavelli had figured out the rough outlines of the model—he advocated for armies composed solely of citizens of the state in question, although he envisioned it as a militia of all able-bodied male citizens in the style of The Roman Republic rather than a professional force—but nobody listened to him. Missing a payment would mean your armies switched over to your enemy. The soldiers themselves were conscripted. An army would come to town and say, "every man here joins us or we hang you". The ones who joined had to loot farms and towns in order to survive since armies march on their stomachs. Often an entire town had to pool their gold, and bribe the invading army to go away (of course, sometimes they'd just take the money and loot anyway).

It didn't matter whose side the army was on; to the common peasant, they were the enemy, as a farmer who found an army spending the winter on his lands would find he didn't have enough to feed his family. There were also large groups of civilians (mostly women and children) that were kidnapped from looted towns, and forced to live as servants and prostitutes for the army. Many children were born in the army and never knew anything else when the war ended decades later. Many mercenaries would just desert the army and strike it out on their own as "Freebooters" which more often than not was just a nicer way of saying bandits and highwaymen, thus furthering the plight of the common peasant just trying to live their lives.

Add to that the religious dimension of the conflict. A particularly fanatical lord would often decide he didn't like that his neighboring lord was Catholic, or Protestant, or the wrong kind of Protestant, and order his mercenaries to go and slaughter his neighbor's peasants even if the majority of said peasants were the same religion as him, as this would destroy that lord's income. Sadly, that's just scratching the surface. Unsurprisingly, many of the greatest works of art depicting the horrors of war have their origin in this conflict, most famously The Miseries and Misfortunes of War

In a grim Foreshadowing of the modern military-industrial complex, the latter half of the war became infamous for largely degrading into the various participants continuing to fight because they could not afford to stop: it was simply cheaper to keep paying your armies by looting the enemy's lands than paying the severance package. This was eventually solved by having The Emperor pay.

The war once and for all broke any pretense of the Holy Roman Empire being a unified state, permanently knocked Spain off of the top spot of Europe's greatest power, cemented France as the dominant power in Europe (at least on land),note The English and the Dutch fought a series of wars around this time for dominance over the seas. The English ultimately won, and kept their dominance for an impressive 300 years, when World War II transferred naval supremacy to the United States. and propelled Sweden to the status of short-lived great power. It also made boots fashionable. It concluded with the Peace of Westphalia, two treaties (in Münster and Osnabrück) that involved the Spanish accepting Dutch independence, a blanket pardon for any crimes committed in the war, and some territorial changes; it's sometimes called the "Peace of Exhaustion". The key point, though, was the acceptance that a ruler could choose the religion of his state (the so-called cuius regio, eius religio—"whose realm, his religion" principle), but those who followed other Christian denominations (Calvinism was covered in this for the first time) could also do that with some restrictions. This pretty much wrapped up the religious wars of Europe.

The war itself had extremely long-lasting effects, the most notable of which was the Westphalian theory of sovereignty

, which is to say the idea that a state has territory, population, a government, and that foreigners do not (overtly) interfere in its affairs, leading directly to the modern concept of the nation-state. Some present-day Mainland Chinese scholars have tried to tout the contemporary Ming Empire's model of vassal/client-state relations with the outside world as the 'true precedent of the concept of national sovereignty' instead. While this model did deny the right of any Barbarian power to interfere with Ming domestic affairs, however, it explicitly endorsed the Ming's right to intervene in those of its client-states — i.e. the exact opposite of the whole point of Westphalia.note On the other hand, this is kind of the point about Mainland China's idea of sovereignty and the proper relationship between China and not-China.

Indeed, 'sovereignty' is the real meaning of cuius regio, eius religio: while religious affairs were in themselves important, they also served as a stand-in for the more general displeasure of the German princes at the constant interference of the Emperor and of rulers across Europe at the constant interference of The Pope (it's no coincidence that the Pope tends to drop out of European history textbooks sometime in the 17th century, reappearing only to crown Napoleon, play the spoiler in Italian unification, and do a deal with Mussolini). The Westphalian system continued unchallenged among Western powers until the 20th century, when a few theoreticians attempted to make modifications in response to the atrocities of World War II and the nasty business after the end of the Cold War (particularly The Yugoslav Wars). Nevertheless, the modern system of states is more or less Westphalian, and several states (particularly China and to a lesser extent Russia) still insist on it.

One of the things that makes the war so maddeningly complicated is that participants have a tendency to go off and fight separate wars whenever they get tired of the main conflict, such as the Danish-Swedish war of 1643–1645.

The back end of the war is largely concurrent with the beginning of the English Civil War, which had similarly wide-ranging long-term effects (for entirely unrelated reasons).

Those wishing to explore this time period more thoroughly in a comprehensive and understandable manner might want to check out C. V. Wedgwood's The Thirty Year's War, or Peter H. Wilson's The Thirty Years War: Europe's Tragedy.

Works set in the Thirty Year's War include:

The Swedish version of "A Lifetime of War", rather than being a 1:1 translation of the English lyrics describing the geopolitical background of the Thirty Years War, tells the story of a nameless Swedish soldier called up to fight and who never came home. The war lasted long enough to take up the entire lives of many of the people affected by it, hence the title. It has become a tradition at performances in Sweden, such as this 2020 performance in Gothenburg, for the audience to sing part of the first verse.

The Swedish version of "A Lifetime of War", rather than being a 1:1 translation of the English lyrics describing the geopolitical background of the Thirty Years War, tells the story of a nameless Swedish soldier called up to fight and who never came home. The war lasted long enough to take up the entire lives of many of the people affected by it, hence the title. It has become a tradition at performances in Sweden, such as this 2020 performance in Gothenburg, for the audience to sing part of the first verse.