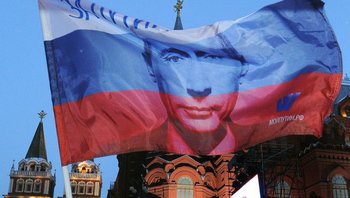 In contemporary Russia, speech is a lot freer than it was, and private business not only exists, but thrives. Competition between private companies can be intense and cutthroat. Literally cutthroat. Which is why private security is one of the most thriving industries. Vladimir Putin and Dmitry Medvedev are seemingly popular, but often quite shady. They casually exchange presidency and prime-ministering.

While the Russians with Rusting Rockets retain the red star on their aircraft,note It's since added blue and white stripes on the outside the proposed new formal uniform is somewhat Tsarist looking, the old Slavic-colours flag is back and Red October is replaced with a somewhat controversial "National Unity Day" which takes place three days earlier.

Russia has a lot of problems to deal with. But you wouldn't know it from the way the fall of the USSR is usually portrayed. If you cut the story short somewhere around late 1991, it looks like the whole Story Arc is over, the Cold War has ended peacefully much to everyone's surprise, and the future looks bright for all involved. Flash forward two years and the economy has been crippled by corrupt privatizations, unemployment and poverty are running rampant, and the new, "democratic", constantly-intoxicated President deals with an unruly Parliament by sending in the tanks. Later, it gets worse.

One particular subtrope associated with The New Russia is the "Russian Nineties", which is the Theme Park Version of the Yeltsinist Russian Federation. Everyone except the gangsters and the oligarchs is starving poor, crime is rampant, the rubles have Ridiculous Exchange Rates, every city is a Vice City, and the whole place is Grimdark. Basically, the Great Depression-era USA meets Ruritania. When speculative fiction extrapolated from this trend, it usually added Cyberpunk into the mix to create an Up to Eleven picture of a failed state, where masses do starve in droves, and the whole place is overtly run as a confederacy of mob families. The Nineties ended with Putin coming to power and oil money coming to town, but they surely can make a comeback because of the worldwide financial crisis, which is what everyone was expecting in 2009-early 2010. The economy (the Russian one at least) has since recovered, but lots of previous problems persist regardless.

Russia now has a problem with The Mafiya, general corruption and a lack of money, although these three are being somewhat dealt with. Following the general decay of... everything during the nineties, the government has been hard-pressed to select which sectors were in the most urgent need of restructuring and/or financing, permitted by improving conditions. The defense sector, hydrocarbons extraction, and other "marketable" goods came first, but this, along with sudden exposure of the economy to the laws of supply and demand left the notoriously bloated and inefficient heavy industries inherited from the USSR to fend for themselves. They either adapted to the situation by scraping up investments and selling abroad, or were merged into large state-owned conglomerates. But annual budgets are not limitless and other sectors were also set aside, resulting in crumbling public infrastructure (education was mostly unaffected, thankfully), under-employment, rampant corruption, and the problems of the USSR's frankly shoddy environmental record. Chechnya and terrorism remain a big issue as well. Neo-Nazism is also a serious problem (because anyone who killed 20 million Soviet citizens must have had a very good reason?), and various fascist gangs attack anyone who doesn't look right on the street. There are homeless war veterans, homeless college-degree holders, more alcoholism than ever before, and a looming demographic crisis similar to that of Japan.

And as if all this weren't bad enough, the Russians, who spent over 75 years being Commie Land after spending several hundred years on the periphery of Europe, were thrown straight into the rawest sort of free-market capitalism with the fall of the USSR. They fell for all sorts of scams: one particularly notorious Ponzi Scheme, MMM, conned 5 to 40 million Russians out of US $10 billion. (Not 10 billion rubles, 10 billion US dollars.) (And now, as of 2011, it's back!)

Thus, Russia is a pretty straightforward example of a Crapsack World right now; and Russians writing about these problems tend to Accentuate the Negative and generally adhere to the far Cynical end of Sliding Scale of Idealism Versus Cynicism.

It is also worth noting that because of a lack of conscript discipline, the draft is a boogeyman for most Russian youth, because nowadays soldiers ruthlessly bully each other, and there are frequent murders or suicides among soldiers (possibly over 300 total by now).note This has been going on since the late sixties, though never in the generalized fashion experienced nowadays. The length of the military service has been reduced to attempt to deal with this. Because of these reasons, most of the youth try to get higher education - Russia has the second largest amount of universities in the world - but low funding and the legacy of Soviet preferences (if it's militarily relevant, it's a priority) meant that the education system is good at producing engineers and technical specialists, but fundamental researchers in all but a few prioritized disciplines have to join foreign faculties or organize themselves: only the country's main university is (low) in the world top 100.note Like everything about university rankings this is a subject of debate, but around 80 is where LMSU is at in most lists.

Right now Moscow is a big and modern city. People there tend to have fair incomes but suffer from bad ecology, ethnic violence and many other problems; on the other hand, economic and social inequality is more striking in Moscow than anywhere else, since it has a really filthy but notoriously rich upper class, a tenuous middle class and lots of lower-class people. Research activities and newly profitable commercial developments such as electronics are also quite centralized there and, to a lower extent, in regional capitals. Since the policies of equal development of the USSR, which were over-focused and over-reliant on heavy industries, died with it, most rural parts of Russia are backwards compared to the capital city. The most notable exceptions are St. Petersburg, which literally is a second capital, and the quickly developing, often oil-rich Siberian regions. In the countryside of southern (Central Asian) and western (European) Russia, there is no middle class to speak of, unemployment is a serious issue, corruption is overwhelmingly rampant, oligarchy is on its march and violence and crime are a common thing. In addition, the military is somewhat of a laughing stock due to the constant bickering and squabbling between design companies, production facilities, and the generals for who gets funding priority this year, aside from regular incompetence and corruption. No wonder the nostalgic mood is very popular among older Russians.

Some political pundits like to compare the modern Russia to the last years of Tsarist Russia. Like Tsarist (Imperial) Russia, modern Russia has an economy dependent on selling raw natural resources such as natural gas or oil. Like in Imperial Russia, most industries are owned by foreign Mega Corps or are government monopolies, the rest are under the control of the current president's pet cronies aka oligarchs. Putin, like Alexander III, reversed many liberal reforms of the previous reign, and Medvedev even looks like Nicholas II. Like in Imperial Russia, the gap between the rich and the poor is growing alarmingly fast. The pogroms (race riots) are back in full swing, although nowadays they target people from Caucasus, and Central Asians rather then Jews. The army is the same hapless Redshirt Army, the police are the same authoritarian riot-stamping goons, the parliament is the same rubber-stamp body and even has the same name (State Duma) as the Tsarist parliament, and the radical opposition is slowly but stably growing. And, like Imperial Russia, it is confronted with a Morton's Fork of external politics: ally itself with an old superpower that rules the waves and which was the enemy number one for a long time, or a new, rapidly developing, land-based industrial powerhouse? What happens next? Second Imperialistic War? Second Civil War?

There are other commentators meanwhile who tend to think that Russia with its brand new "sovereign democracy" is, despite it all, in a position to remain a global power - and Wild Card - for the immediate future. They argue that the current state of affairs under Putin is a response to what some Russians claim as the failure of Western liberal reforms in The '90s. And if its recent activities in the Middle East are any indication, especially Syria, Georgia and Ukraine, it still seems premature to write the country off just yet. The events of the Crimean crisis of 2014 also lend credibility to the theory that the country is asserting its independence from the West and strengthening its militarist regime. But, the Putinist government still remains crypto-Tsarist/Soviet, strengthening religious fervor and encouraging every reactionary idea as well as reviving Soviet-era policies. And some of the ideologues rising up to power in the Russian-backed parts of Donbas in Ukraine, unfettered by the international norms, openly claim succession to the White Guard ideologies of the Russian Civil War, or the Red Army of WWII fighting the new Ukrainian government. Even their breakaway state in eastern Ukraine was called Novorossiya

for a few months, which literally translates to New Russia - an old Imperial term for the region revived by the invaders.

Is Russia, these days, crypto-Tsarist, or is it crypto-Soviet? Or is it possible to be both? The government is socially conservative and pretty much neo-Tsarist, but the people want the good old days of the USSR back. The days when Russia was reasonably well-off, and when it mattered in the world. This creates a domestic Morton's Fork to go with the international one: the ruling class dreams of being neo-Tsarist feudal overlords, and will fight tooth and nail against any revival of Soviet policies; the populace dreams of not being ruled by neo-Tsarist feudal overlords, and will fight tooth and nail for the revival of Soviet policies, or at least the economic ones. Alienating the elites means economic disaster, but alienating the populace means mass protests, probably on a broader scale than those of 2011 (which were mostly limited to the middle class). The one thing that the two sides agree on is that pro-Western liberals should be given the boot, and Russia should be de-Americanized; and so, this is the one thing that's consistently happening, while Putin attempts to balance between the people and the elites and prevent the return of another full-blown civil war from breaking out.

The New Russia in fiction