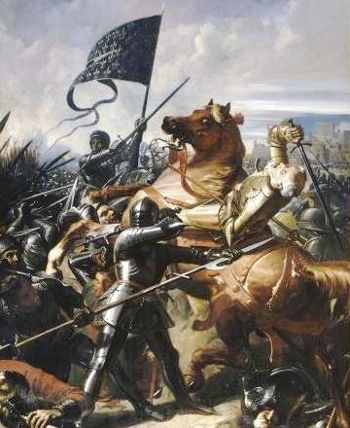 Battle of Castillon (1453) - John Talbot, Earl of Shrewsbury is seen falling from his wounded horse.
"(The) war was called the Hundred Years' War, because the troops signed on for a hundred years or the duration."
—1066 and All That
Advertisement:

The Hundred Years War (in French, La Guerre de Cent Ans) was a 116-year period of conflict (of which 79 were active periods of war) between The House of Plantagenet who ruled England, Ireland, Wales and much of French territory, and France's House of Valois, who owned what was the remainder of the lands. Traditionally set between 1337 and 1453, although the peace was really acknowledged only with the Treaty of Picquigny (1475), in which Louis XI bought off the Yorkist king Edward IV to abstain from his plans to renew the war in France.

The conflict was a large-scale Succession Crisis, which came about after the death of the last French Capetian king, Charles IV the Fair. Originally Edward III grudgingly accepted the succession of Philippe VI of Valois, paying homage to him in 1329 and 1331 as feudal overlord for Aquitaine (Guyenne), England's main source of salt and Bordeaux wine. (The English have always loved their claret.) However, when Philippe confiscated Guyenne in 1337, Edward reacted by claiming the French throne for himself (by descent through the female line he was more closely related to Charles IV than Philippe VI was) and adding the arms of the Kingdom of France to those of England. (This claim and its heraldic manifestation were not renounced until the treaty of Amiens in 1802, a decade after France ceased being a kingdom). Because in the early phase of the war the duchy of Guyenne was the main bone of contention, some historians say that it actually began in 1294, when Philippe IV the Fair of France confiscated the duchy for the first time (he had to give it back to Edward I in 1297), leading to an uneasy peace, during which the English burned and razed a newly erected French fortress in 1323.

The war was split into multiple periods and offshoots, and saw knights from both sides make a name for themselves, including England's Prince Edward, aka The Black Prince, and later France's Joan of Arc, as well as many major battles, including Crécy, Sluys, Agincourt, Orléans, Patay and Castillon. The conflict also saw multiple awesome moments (some usually involving the aforementioned Black Prince or Jeanne d'Arc).

As feudal levies were being replaced by professional soldiers and advances in military technology (the increasing coverage of plate armor, more and bigger cannons, etc.) necessitated ever larger expenses for the monarchs, the Hundred Years' War was probably the first European war in which financiers, such as Jacques Coeur on the French side, played a crucial part. In 1340 the debts incurred by Edward III caused the bankruptcy of a number of important banks in Florence. While the French gradually developed a more efficient system of regular taxation, the English throughout the war tended to run short of cash despite windfalls such as the three million écus paid out as ransom for King Jean II of France, captured in the battle of Poitiers, mostly because the English had got it into their heads that taxation required the consent of Parliament, and any attempt by the King to do otherwise would be political suicide.

In turn, the increasing necessity for armies representing/encompassing the whole of the English kingdom—i.e. the foundations of the idea of a 'national' army—also increased pressures and tensions between kings (who would want armies loyal personally to them, and not to their barons) as well as the barons/nobility (who would prefer the status quo—and the soft power/leverage this gives them over their king). This tension would eventually give rise to what is called bastard feudalism

. Furthermore, the English Kings' increasing desire to see tax revenues as good as their French counterpart became quite important about 200 years after the end of the war.

The war ended with the majority of the English being forced out of France. However, over 100 years of war, pillaging, epidemics and famine had reduced France to a third of its pre-war population. Meanwhile, England lost half of its pre-war population and all its holdings on the continent save for Calais, becoming an island nation again for the first time since before the Norman Invasion, which affected its outlook and development for the rest of the millennium. But first, it had to deal with the Wars of the Roses; the English defeats on the continent contributed in many ways to the outbreak of this civil war.

The war also had a cultural impact on the development of The Renaissance, because France went into decline after the war, giving way to the rise of Italy and Flanders. Technically, the peace treaty signed after the Agincourt campaign in 1415 was the kickstarter, because the English and Burgundian courts all brought their musicians with them - and many interesting new ideas were discussed. Some influential composers of the century were also present there at a young and formative age.

Works about the Hundred Years War include :