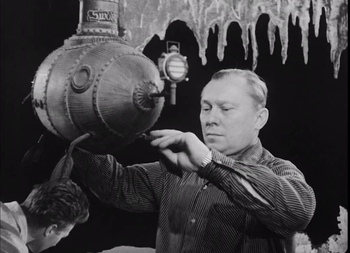 A Czech filmmaker (November 3, 1910 – April 5, 1989) who—despite primitive working conditions, shoestring budgets, near-constant political turmoil in his home country, and Soviet censors breathing down his neck—somehow managed to produce some of the most visually innovative cinematic work of the 20th century.

His films combine live-action elements, animation, and Special Effects of every kind to create highly stylized and imaginative visuals, paying homage to all kinds of old-fashioned art, from ancient Persian miniatures to illuminated European manuscripts to Victorian steel engravings. Directors Ray Harryhausen, Tim Burton, John Landis, and Terry Gilliam are among those who have lauded his films, and it's been said that Wes Anderson and Jan Švankmajer were influenced by him too. He's often been called the Czech equivalent of Georges Méliès, and the Barbican Centre in London described him simply as "unarguably one of the greatest animators of all time."

Tropes common to Zeman and his works include: