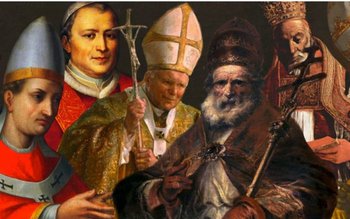 And so it was decided

that the Pope shall have the biggest hat.
"And I say to thee: That thou art Peter; and upon this rock I will build my church, and the gates of hell shall not prevail against it.
And I will give to thee the keys of the kingdom of heaven. And whatsoever thou shalt bind upon earth, it shall be bound also in heaven: and whatsoever thou shalt loose on earth, it shall be loosed also in heaven."
— Matthew 16:18-19
Advertisement:

The head of the Catholic Church and, since 1929, the head of state of Vatican City. His official list of titles is, "Bishop of Rome, Vicar of Jesus Christ, Successor of the Prince of the Apostles, Supreme Pontiff of the Universal Church, Primate of Italy, Archbishop and Metropolitan of the Roman Province, Sovereign of the State of Vatican City, Servant of the Servants of God." Not quite infallible.

Wears a very Nice Hat. And Red Shoes (well, only a few did). At any given time - in recent history, that is - probably both the most loved and the most hated human being around (with a few notable exceptions). Has the best job security of anyone on the planet (not to mention some of the best physical security, in the form of the bulletproof Popemobile and the Swiss Guards). These days, anyway; things were very different in the Middle Ages.

The infallibility thing is generally misunderstood. It doesn't mean that the Pope is incapable of being wrong about anything, or even that he cannot sin - just that he cannot be wrong regarding on a matter of revealed faith or morals explicitly in his capacity as the earthly Head of that Church. It's not so much "the Pope's word is law and he is perfect" as "God will stop the Pope saying anything wrong in his authority, because he would lead lots of innocent people astray if he did." All in all, a Pope has only spoken infallibly seven times over two millennia.note  Though it should be noted that the current form of this dogma dates to the 19th century He is also infallible when adding Saints to the Canon, but that isn't really what most people (Catholics included) think of when talking about infallibility.

The Pope is elected via an unusual process that involves smoke from chimneys (the colour is indicative of whether an agreement is reached or not) and locking a bunch of old men in the Sistine Chapel (starve the cardinals into a decision).note All joking aside, that is in essence how the conclave came about—the College of Cardinals, after the death of Pope Clement IV in 1268, proceeded to drag their heels for three years in Viterbo (where the election was being held, as at the time the rule was to elect the new Pope where the old one had died and he had been there) bickering over who the next Pope would be, with two compromise candidates running away because they felt unworthy (or because they feared the Frenchmen that were in town to make sure they got a pro-France pope). The faithful in general and the locals in particular were getting sick and tired of it, and so, to finally force them to come to a decision, the people of Viterbo first locked them inside the Popes' Palace. When that didn't work, the Cardinals were put on bread-and-water rations. When that didn't work, the building's roof was removed. After which (and the French departure due a scandal) they finally took the hint and appointed a committee of six cardinals to do the job, which elected Pope Gregory X in hours. The new Pope decided the ordeal (minus ripping roofs off of buildings) was a good way of making sure the Cardinals came to a choice sooner rather than later, and codified the conclave—and enforced fast after a certain number of inconclusive votes—in a Papal bull in force to this day. The history of the position is tumultuous, to put it mildly, because the potential power and influence of a Pope attracted the ambition of many power-hungry European families that were willing to commit all sorts of unsavory or ruthless acts to put one of their family members on the pontifical throne, without caring about whether or not said family member would be a good religious leader. This resulted in many popes acting more like powerful kings than leaders of the church; it took quite a few centuries until the papacy was finally separated from these political wheeling-dealings.

The Pope should not be confused with the heads of the Orthodox Churches (one of several Patriarchs, who are sometimes called "Greek Popes" erroneously), the patriarch of the Coptic Church (whose official title is "Pope"), or the head of the Jesuit order, often called the "Black Pope" due to the power of the order in the past and his wearing of simple black priests robes instead of the papal white.

Catholic tradition holds that Saint Peter was the first Pope; of course, there are many theories among historians and the different Christian denominations about how the succession started. The other wiki's article on the subject

is a better place to search for details.

Popes Who Haven't Existed Yet

The Pope In Fiction