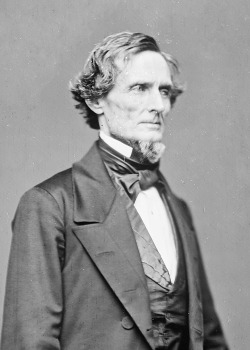 "If the Confederacy fails, there should be written on its tombstone: Died of a Theory."
Advertisement:

Jefferson Finis Davis (June 3, 1808 – December 6, 1889) was the first and only president of the Confederate States of America.

Prior to this, Davis lived a more interesting life than many assume of him. He attended West Point and fought in the Black Hawk War between Midwest settlers and the Native American tribes there (ironically, Abraham Lincoln also fought in this war). Davis served under future President Zachary Taylor, and, against Taylor’s wishes, married his daughter Sarah in 1835. They soon got malaria, from which she died three months later, and Davis was never really the same after that, even after he married again in 1845.

Davis was elected to the House of Representatives in 1845 (representing Mississippi at large), but resigned less than a year later to fight in the Mexican-American War. He fought very bravely in the war, reached the rank of Colonel, and met with President James K. Polk a few times. He then completed the term of a Mississippi senator who died while in office. After a failed attempt at becoming governor of Mississippi, Davis served as Secretary of War during the presidency of Franklin Pierce. He was then elected to the Senate again, and spent most of his term making speeches against secession. Although he did believe that each state had to right to secede, his service as Secretary of War led him to believe, correctly, that the North was stronger than the South. When Mississippi seceded in 1861, he resigned from the Senate, which he would later call the saddest day of his life.

Less than a month later, Davis was chosen as the president of the Confederacy for his political and military experience. He actually wanted to serve as the leader of the Confederate forces, though. Davis initially sought a peaceful way to maintain the independence of the Confederacy, but he gave up when Abraham Lincoln refused his proposals and the Union-controlled Fort Sumter in South Carolina was attacked. Thus, The American Civil War began. Davis was well aware that the North had advantages over the South both in terms of resources and manpower, and from the beginning he determined to fight a mainly defensive war, while lobbying for support from the United Kingdom and France to help win international recognition as a new nation.

Unfortunately for Davis, running the South during this very difficult time proved to be too much for him. It didn’t help that the relationship between the state and federal governments of the Confederacy were looser than in the North, where the federal government has clear authority over state governments.note For example, at one point, Georgia required more locomotives to transport troops and military supplies, and noted that Florida had some that weren't being used. After Florida denied Georgia's request, Georgian soldiers marched to the border to seize the locomotives by force, and were countered by Floridian soldiers, the whole affair stopping just short of a shooting battle. Or that Davis' cabinet members often fought with both him and each other. Or that no foreign nation would come to the Confederacy’s aid despite his pleas. Or that the Southern economy collapsed during the war, and that Davis’ decision to fix it by printing bills en masse only made things much worse. From start to finish, the Confederate economy's currency inflated by over 9000%.

Davis' decision to fight a largely defensive war, owing to the Union's previously noted overwhelming material superiority to the Confederacy, was a sensible one. He appointed Robert E. Lee to defend Virginia, which saved the Confederate capital of Richmond for a few years. In early 1865, Lee warned that he could no longer defend Richmond, and Davis was forced to flee, along with his cabinet. After a final meeting in Danville, he went south with the intention of sailing to Europe with his wife, but he was captured before they reached the coast of Georgia. Urban Legend states that he dressed as a woman to avoid capture, but he only put on his wife’s overcoat because it was cold that morning. Davis was captured, charged with treason, and imprisoned for two years. A trial was never held, even though Davis wanted one, because the members of President Andrew Johnson's cabinet could not agree whether they could prove charges of treason. After two years of imprisonment, Davis was released on bail of $100,000, which was posted by prominent citizens including Horace Greeley, Cornelius Vanderbilt and Gerrit Smith. Davis remained under indictment until he was released from all liability by the presidential amnesty issued by Johnson on December 25, 1868.

Since Davis could not hold public office again, he struggled for much of his post-war life. His business ventures typically ended with failure. In fact, he probably would have lived in poverty if it wasn't for the generosity of wealthy Southern author Sarah Dorsey, who let him live with her and left her plantation and wealth to him in her will. He wrote two popular books about the Confederacy during his last few years, The Rise and Fall of the Confederate Government and A Short History of the Confederate States of America. He also went on tours asking Southerners to accept that the North won and pledge loyalty and goodwill to the Union, which redeemed him in the eyes of many bitter Lost Cause-supporters. Privately, though, Davis hated the North's Reconstruction policies and also opposed giving African Americans the right to vote. After he died, the South held a very, very large funeral in his honor in New Orleans. Nearly a century later, Jimmy Carter restored the citizenship of the deceased Davis.

Needless to say, you'll get different opinions on Davis depending on whom (and where) you ask. Many in the Southern states that seceded remember him, roughly, as a hero who tried his best to defend the Confederacy from the Union forces. There are monuments, streets, and schools honoring him in these states. In the North, he’s basically remembered as the guy who lost to Lincoln and praise to him is typically laughed off. Due to his support of slavery and his beliefs that Whites were racially superior to Blacks, the African American community isn’t very fond of him. Most historians don’t think very highly of his leadership abilities, although there is a growing opinion that he was a potentially competent leader stuck in a position that called for far more than mere competence. This topic tends to get controversial.

Here are a couple more fun facts: Barack Obama, through his White mother, is related to Jefferson Davis. The first Black member of Congress, Hiram Rhodes Revels, was elected to the Senate from Davis' state of Mississippi, but to the other Senate seat.