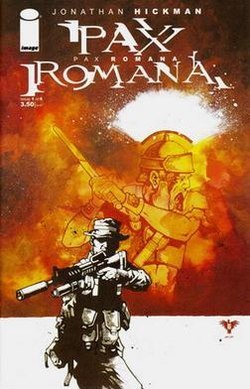 In the not too distant future, a Vatican-backed research project has discovered the secret of time travel. With it the Church plans to fix the future by altering the past. They send a warehouse of modern weaponry and enhanced soldiers to Rome in 312 AD. But plans change quickly as the cardinal in charge of the mission is shot. Or at least that is how the aging Gene Pope is telling the young Holy Roman Emperor in an alternate Constantinople generations after those events.

Pax Romana is a four-issue comic series by Jonathan Hickman released in 2008. Set largely in the later years of the Roman Empire (though through the lens of hindsight), the plot largely follows a full contingent of time-displaced soldiers led by Nicholas Chase, a retired American general along with a cohort of partners on a mission from the Pope to change history and right the wrongs of modern humanity. Things however don't exactly go as planned, with changes in strategies, jealousies, political intrigue and human error taking the original mission on a different if interesting course.