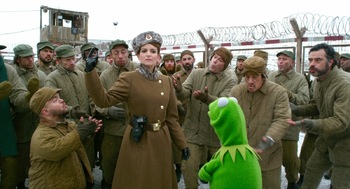 "What crime did you Kermit to get sent here, comrade?"
Anya Amasova: I took a survival course in Siberia.
James Bond: Yes, I heard a lot of your people do.
— The Spy Who Loved Me
Advertisement:

That place where Josef Stalin sends you if you don't behave. No, not Hell but the next worst thing.note Some inmates would suggest that this comparison is too easy on the camps.

Gulag is an acronym for Glavnoye Upravleniye Ispravitelno-Trudovyk Lagerey i Koloniy, which in English roughly means (now take a deep breath) "The Chief Administration of Corrective Labour Camps and Colonies" and was the name of the NKVD wing that administered the prison labor camps.

Note that a similar labor camp system existed in Tsarist Russia, but it was only used to imprison actual revolutionaries (and criminals), not merely tellers of anti-Tsar jokes. It supposedly was also much nicer — Lenin himself noted that it was one of the best times of his life, with the rich Siberian countryside doing wonders for his health and lax policing leaving plenty of time for the revolutionary prisoners to fraternize and catch up on their reading. When he and the Bolsheviks took over, they went out of their way to show those incompetent Tsarists how prison camps are supposed to be run, by basing all sentences on the harshest Tsarist "katorga" regimes. In the post-WWII period, even the actual word "katorga" was revived for a brief time.

A term not used much in Russia itself at the time ("the camps" was the most commonly used term), it has expanded to cover the entire system of Soviet oppression.

The Gulag's modern successor organization is called FSIN, and is used to hold mostly common criminals, though political prisoners still exist. The system of camps themselves changed little, if became somewhat more lenient.

The history of the Gulag system has been covered elsewhere, so a few general points:

The Gulag Archipelago, The First Circle (about the Sharashka system) and One Day in the Life of Ivan Denisovich, all by the late Aleksandr Solzhenitsyn, are highly recommended further reading. On the other hand many people criticize Solzhenitsyn for being biased and not entirely truthful, so the most informative author is probably Varlam Shalamov, also a former inmate of the Gulag, but not politically motivated and generally regarded as more accurate.