Literature / One Day in the Life of Ivan Denisovich 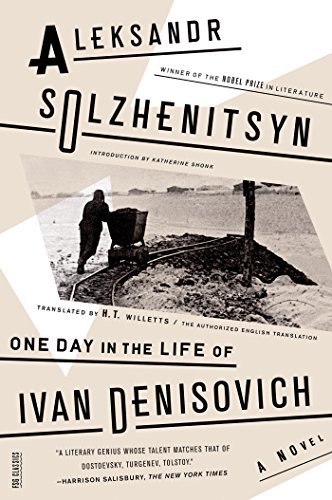 “Can a man who's warm understand one who's freezing?”
—pondered by Shukov as he haggles with the med bay clerk
Advertisement:

Ivan Denisovich Shukhov is a prisoner ("zek") in the Soviet Gulag system, imprisoned on charges of being a spy after being captured by the Germans and escaping, and sentenced to 10 years. At the time of the story, sometime during January, 1951note specifically the 23rd, going by the phases of the moon, Shukhov is serving out his sentence in a special camp in Siberia. His number is Щ-854note the letter Щ is called "shcha", although the actual Russian pronounciation is closest to the Japanese "っしゃ" ("ssha") and he is part of squad 104. This book details one day in his life, as he struggles to live through another day.

This book, written in 1962 by Aleksandr Solzhenitsyn and based on his own experiences in the camps, was the first widely distributed account of Stalinist repression, and helped raise awareness globally of the conditions in the system.

You can read it in its entirety here.