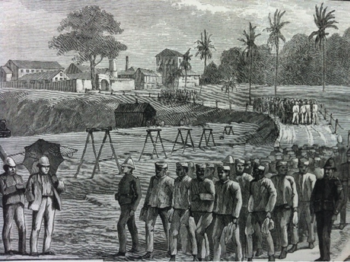 What to do with criminals is a problem for societies real and fictional. One common solution in times past and perhaps future is the Penal Colony. This is a self-contained society consisting mostly of prisoners and those who guard them, usually separated from the civilized world by natural barriers in addition to (or instead of) prison walls; this can often be a remote island far out in the ocean, or some piece of land in the middle of nowhere, but in science fiction it may be a whole Prison Planet whose Hat is an orange jumpsuit.

Typically the prisoners will be required to do some sort of hard and dangerous labor; mining is a favorite in science fiction. If the colony is isolated, loosely controlled, or has no guards at all (often the case with a Deadly Environment Prison, where the surrounding locale is a Death World that naturally deters escape attempts), it will resemble a Wretched Hive with the prisoners more or less running the place themselves.

The Penal Colony can be a rich source of story ideas; if you're recruiting for a Ragtag Bunch of Misfits, you might do it here. If a Rebel Leader is captured by The Empire and sent here they may have to fight their way to the top of the prison hierarchy, then arrange an escape. Need a source of people you can dispose of without anyone caring? Have your Xenomorph invade the Penal Colony. Is the place too loosely supervised? If so, it may become a base of operations for a crime lord.

These jails are often a type of Hellhole Prison. Particularly inescapable ones can overlap with The Alcatraz and Phantom Zone. Often related to Settling the Frontier. See also Reassigned to Antarctica. The Super-Trope to Sentenced to Down Under, which is specifically the old British practice of sending their convicts to Australia between the late eighteenth and mid-nineteenth centuries.