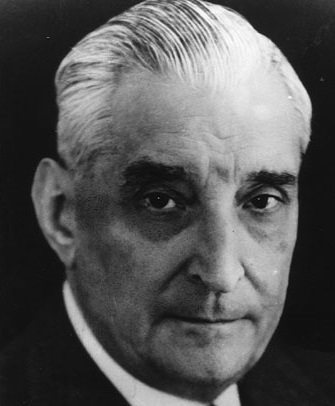 António de Oliveira Salazar (28 April 1889 – 27 July 1970) was a statesman and professor who distinguished himself as the dictator and Prime Minister of Portugal between 1932 and 1968.

The son of a small landowner/agricultural worker from Santa Comba Dão, he studied at Viseu Seminary to become a priest but he would later follow the academic route, entering the University of Coimbra in 1910, the year of the October 5 Revolution which gave birth to the Portuguese First Republic. He would graduate in Law with a specialization in Finance and Economic Policy, and become a professor at the same Universitynote At this time, Economics was a relatively new academic discipline in Portugal, with the first course in pure Economics only appearing in 1949 on what is now ISEG; the University of Coimbra didn't open its Faculty of Economics until 1972..

During his stay at the University, he dabbled in politics, writing several articles espousing his views on social studies and the events of the day in several newspapers, especially at his friend Manuel Gonçalves Cerejeira'snote He became Cardinal-Patriarch of Lisbon. weekly O Imparcial. Beyond finances, he also criticized the chronic political instability endemic to the First Republic and, being a devout Catholic, its anticlericalism. He was invited to run for Parliament in 1921, winning a seat. He would only occupy it for one day, finding it riddled with chaos and futility. Around then he became convinced that democracy, liberalism and parliamentarism were not the way for his country.

Then, in 1926, there was a coup known as the Revolução Nacional ("National Revolution"). He was invited to become Minister of Finance, but later resigned because his conditions were not met. He would come back in 1928 to the Finance portfolio and he became notable for the stabilization of the State's finances which took them out of their precaritynote He wasn't the first, however: between 1913 and 1914, Prime Minister Afonso Costa was able to stabilize the country's finances. Due to the First Republic's instability, Salazar's stabilization lasted longer..

A Cult of Personality was built around his persona, becoming overnight the "Saviour of the Fatherland", which he leveraged to achieve higher powers and successfully impose his new creation on Portugal.

In 1930, the União Nacional ("National Union") was founded; it was to be the future single party. He was finally appointed as Prime Minister in 1932, and the next year he consolidated his power by presenting the new Constitution of 1933. His new creation, the Estado Novo ("New State"), an authoritarian, "corporatist" (in this sense

) and nationalist regime, was finally a reality.

Curiously, despite the authoritarian and conservative nature of his regime, he disliked the racial supremacy promoted by Hitler, regarding it as a "pagan and anti-human" ideology, and was worried about the prospect of Nazi Germany winning World War IInote make no mistake, he disliked Communism more than the Nazis, and viewed them as a bulwark against the Soviet Union. It's why he aided Francisco Franco during the Spanish Civil War, though he wasn't very thrilled about Franco's ties to the Axis.. On the other hand, he couldn't support the Allies such as Portugal's oldest ally Britain with whom they had had the longest alliance in history, because that would put their colonial territories at risk which Portugal couldn't defend, not to mention their own home country (specially after the Nationalists won the Spanish Civil War). So he opted to remain neutral by selling resources to both sides, while Portugal became sort of a refugee gateway for those fleeing the war in Europe.

His regime was notable for financial, political and social stabilization and (relative, especially towards the end) economic growth, at the cost of political repression (especially of communists) and high levels of poverty and income inequality. Political opposition was reallowed, albeit under extremely tight control, after World War II. The last years of his regime (seven of which were under his successor Marcello Caetano) were centered around the Portuguese Colonial War, a 14-year war fought between Portugal and the several colonial liberation movements (PAIGC in Guinea-Bissau and Cape Verde, FRELIMO in Mozambique, MPLA, UNITA and FNLA in Angola and FLEC in the Angolan province of Cabinda).

Salazar fell from a chair in his summer house in 1968, also suffering from cardiac arrest and losing lucidity. He was removed from power and replaced by Marcello Caetano shortly thereafter. When he unexpectedly recovered lucidity, those around him successfully kept the illusion that he was still in power, with him still signing "government papers" and holding "cabinet meetings", until he died in 1970.

He's still a fairly divisive figure, both among the general public and among historians. In March 2007, Salazar was elected the "Greatest Portuguese Ever" with 42% of votes on the RTP1 TV show Os Grandes Portuguesesnote the Portuguese equivalent of 100 Greatest Britons as well as "Worst Portuguese Ever" on the parody TV show Axis of Evil from rival channel SIC Notícias. Make of that what you will.

Salazar Slytherin was named after himnote While the Real Life Salazar was hardly as racist as Slytherin, when an author names the patron saint of sociopaths in her children-aimed book after you, it sorta means you done goofed..