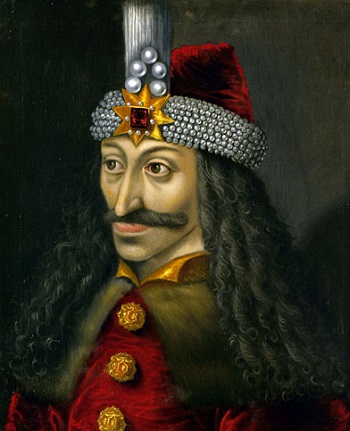 The man, the legend. Showing off his Manly Facial Hair and Crown.
Advertisement:

(1431–1476) was a medieval ruler of Wallachia (a region of what is now Romania) who is best remembered today for his bloody deeds and for lending his patronymic name to the archetypal vampire Dracula. Though he wasn't known for biting people's necks or drinking their blood (maybe), he was nevertheless well-known for spilling it. A man of extremes in turbulent times, he has been regarded either as a brutal but fair hero, or a completely crazy sociopath. As Voivode (warlord) of Wallachia, he earned the nickname "Vlad the Impaler", or Vlad Țepeș in Romanian, from his practice of impalement, which was, and still is, one of the most gruesome ways of dying imaginable.

Vlad was born in Sighișoara, Transylvania in the winter of 1431 to a noble family, in a time when the Christian states of Eastern Europe, which included Hungary, Translyvania, Wallachia, Moldavia and others, contended for power with each other and the Ottoman Turkish Empire. His father was Vlad II Dracul, future Voivode of Wallachia and son of the celebrated Voivode Mircea the Elder. His mother is believed to be the second wife of Vlad Dracul, Princess Cneajna of Moldavia. He had two older half-brothers, Mircea II and Vlad IV Călugărul (Vlad the Monk), and a younger brother, Radu III the Fair. His family lived in Transylvania, but was of Wallachian descent. In later life he would divide his time between the two regions, both now part of modern Romania.

In the year of his birth Vlad's father and namesake had traveled to Nuremberg, Germany where he had been vested into the Order of the Dragon, a Crusader-style knightly organization sworn to fight the Ottoman Turks. At the age of five, young Vlad was also initiated into the Order. Thus his father became known as Vlad Dracul, "The Dragon", and in turn he was Vlad Dracula, "Son of Dracul" or "Son of the Dragon" (more loosely "Dracul Junior").

In 1436, Vlad Dracul became Voivoide of Wallachia as Vlad II (some say co-ruling with his son Mircea II). He was ousted in 1442 by rival factions in league with Hungary. But he secured Ottoman support for his return, agreeing to pay the Jizya (tax on non-Muslims) to the Sultan and also send his two legitimate sons, Vlad and Radu, to the Ottoman court, to serve as hostages of his royalty.

While Radu became a court favorite and eventually converted to Islam, Vlad was imprisoned and often whipped and beaten because of his verbal abuse towards his trainers and his stubborn behavior. These years presumably had a great influence on Vlad's character and led to Vlad's well-known hatred for the Ottoman Turks, the Janissaries, his brother Radu, and the young Ottoman prince Mehmet II (even after he became sultan). He was also envious of his father's preference for his elder half-brothers, Mircea II and Vlad Călugărul. He also distrusted the Hungarians and his own father for trading him to the Turks and betraying the Order of the Dragon's oath to fight the Ottoman Empire. Vlad was later released under probation and taken to be educated in logic, the Quran and the Turkish and Persian languages and works of literature. He would speak these languages fluently in his later years. He and his brother were also trained in warfare and riding horses.

With Ottoman support, the boys' father Vlad II Dracul took back his throne, but over the years he tried to play both sides. Eventually he and Mircea II were murdered in 1447 by rival factions in league with Hungary (again). The young Vlad was released in 1448 and became Vlad III, Voivode of Wallachia for the first time, ostensibly also with Ottoman backing. But after just a few months he stepped down and went to Moldavia and then Hungary, where he allied himself with the dominant warlord John Hunyadi. With Hunyadi's support, he claimed the throne of Wallachia again in 1456. It was his second reign where he made his name as both a warrior against the Ottomans and as a bloodthirsty ruler. He fought their incursions into his lands and even took the fight to their own territories beyond the Danube River. He continued to be an ally of Hungary, now led by Hunyadi's son King Matthias Corvinus, but also sought to keep his lands independent.

Impalement was Vlad's preferred method of torture and execution. He impaled many of his own country's nobility (the boyar class) because he felt that they had destabilized Wallachia. He also impaled thousands of Turkish soldiers as psychological warfare, all in the name of protecting the Christian kingdoms from the Ottomans. Several of the woodcuts from the German pamphlets of the late 15th and early 16th centuries show Vlad feasting in a forest of stakes and their grisly burdens outside Brașov, while a nearby executioner cuts apart other victims. It was reported that an invading Ottoman army turned back in fright when it encountered a forest of impaled corpses along the Danube River. It has also been said that in 1462 Mehmed II, the conqueror of Constantinople, a man noted for his own psychological warfare tactics, returned to Constantinople after being sickened by the sight of 20,000 impaled corpses outside Vlad's capital of Târgoviște.

But it was also in 1462 that his second reign ended, when an Ottoman army led by his own brother Radu and supported by rebellious boyars captured his castle. He escaped to Hungary but Matthias Corvinus had him imprisoned for political reasons.

The reputation of Vlad's cruelty was actively promoted by Matthias Corvinus, who tarnished Vlad’s reputation and credibility for a political reason: as an explanation for why he had not helped Vlad fight the Ottomans in 1462, for which purpose he had received money from most Catholic states in Europe. Matthias employed the charges of Southeastern Transylvania, and produced fake letters implicating him in high treason, written on 7 November 1462, which were used to justify his imprisonment.

However, eventually he worked his way back into the king's good graces, even taking the king's sister as his second wife. In 1474 he was released, and went to live in Transylvania. Meanwhile his brother Radu, who the Ottomans had put in his place, had died. In 1476, he returned to Wallachia and became Voivode again for the third and last time.

Vlad was killed shortly into his third reign. There's debate over if Vlad was assassinated or died in battle, but his corpse was decapitated and his head impaled by the Ottomans at Constantinople as a trophy, and his body was buried unceremoniously, possibly at Comana, a monastery founded by Vlad in 1461. The Comana monastery was demolished and rebuilt from scratch in 1589. In 1515, 35 years after his death, Wallachia finally was completely defeated by the Ottomans and became a vassal of the Ottoman Empire.

After Vlad's death, his cruel deeds were reported with macabre gusto in popular pamphlets in Germany, reprinted from the 1480s until the 1560s, and to a lesser extent in Tsarist Russia. These works estimated for the number of his victims ranges from 40,000 to 100,000, comparable to the cumulative number of executions over four centuries of European witch hunts. According to the German stories the number of victims he had killed was at least 80,000. In addition to the 80,000 victims mentioned he also had whole villages and fortresses destroyed and burned to the ground. These numbers are most likely exaggerated.

Surprisingly, while German, Russian, Hungarian, and Turkish literature and folklore all portray Dracula as a monster, he's considered a hero in Romania for his opposition to both Hungarian and Ottoman conquest, being voted among the 100 Greatest Romanians as recently as 2006 (compare Richard The Lion Heart, Napoléon Bonaparte or George Washington). This tradition of valorizing Vlad the Impaler dates to the era of romantic nationalism, when Romanian intellectuals, artists, historians, re-interpreted their past to find heroes of nationalism. Vlad the Impaler fit the tenor and purpose of their times. Before then, there's little to no record of Vlad the Impaler being especially popular and well liked by the people of Wallachia and Romania. The earliest Romanian chronicle about Vlad the Impaler discussed his persecution of the Romanian boyars. Romanian folklorists documented the existence of an ongoing Romanian oral tradition among the peasantry which consistently featured Vlad III as an evil feudal lord and boogeyman figure, and the existence and persistence of this tradition from the seventeenth to the early twentieth century suggests that the Voivode's cruelty and misdeeds might have been truly extensive for the peasantry to maintain such an ongoing tradition and that it's not merely the case that his enemies demonized him exclusively. The ameliorative tradition of the Impaler originated among the Romanian intelligentsia, and as such comes from top-down rather than from the people. Most notably, during the Communist Era, where the Nicolae Ceaușescu regime elevated Dracula as a national hero using the earlier romantic tradition, and the precedent of a tradition justifying a ruler who indulged in cruelties for the greater good (as romantic nationalists defended Vlad III) was quite useful to Ceaușescu in a manner not dissimilar to Josef Stalin and his fondness for Ivan the Terrible.

He tends to get a Historical Villain Upgrade even in works that do not identify him with Stoker's Dracula or otherwise depict him as a vampire. Except in Romanian literature, where he always gets a Historical Hero Upgrade, from poetry to historical novels.

Appears in the following works (most of the Dracula characters tend to also be him, as such this will only list depictions that are actually supposed to be Vlad III, or explicitly based off of him):