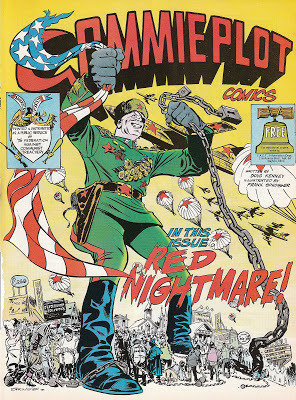 Dirty Communists are, essentially, Cold War-era villainous portrayals of the Soviet Union's people. After World War II, there was a very large effort to make them stock villains the same way Those Wacky Nazis were and still are. Special attention is brought to emphasizing all those wacky tropes found in Glorious Mother Russia.

Although Dirty Commies reached its height with the Cold War, the trope began at the turn of the 20th Century as communism and anarchism began to take root in the capitalist powers. Indeed, even before that, the title "The Communist Manifesto" itself was an ironic attack on Europe's fear of "communism," at the time meaning more the advocacy of living in "communes", though that also had a different meaning to many Europeans.note Commune was used as the term for a municipality in parts of Europe, which France, Italy and Sweden retain. The far-left of the time taking over the Paris Commune, that is, the government of the municipality of Paris, during the Franco-Prussian War, was a significant influence on Karl Marx and he mentioned it as the first example of the "dictatorship of the proletariat". Of course, since many communist nations were totalitarian dictatorships that practiced political persecution, censorship and outright genocide, some portrayals of Dirty Communists will play up these aspects to make them even more threatening.

This trope is for when the negative aspects of the Soviet Union are caricatured or used for comedic purposes (as pictured), or when Communists are shown carrying out their policies For the Evulz rather than out of expediency or misguided idealism. With the end of the Cold War, this has become a mostly Dead Horse Trope, though it oddly has a lot more universal success with post-Soviet villains than it has ever had with actual Communist ones. Related to Red Scare. It remains a significant legacy trope that many authors still use. Is sometimes still used in works set after the Cold War that involve the communist guerilla/terrorist groups that remain active into the present day, the majority of which are based in rural Asian and South American regions.

See Red China for a similar trope dealing with that other Communist power. Contrast Chummy Commies. Also contrast Heroic Russian Émigré, which is sympathetic portrayal of anti-Soviet Russians who had to emigrate to the West.

He then presses a button on his desk and the Soviet banner drops in Red Square, the turf rolls back and the Berlin Wall complete with guards and dogs rises out of the ground, and Lenin busts out of his tomb, yelling "Must crush capitalism!"