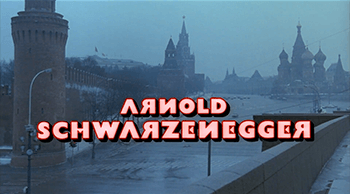 Who is this Lyaiold Ssnwlyazeieggeya?!
Richie: It's in Russian.
Eddie: You just put the Rs the wrong way 'round!
Richie: THAT'S WHAT RUSSIAN IS!
— Bottom
Advertisement:

In a lot of Western posters, you see something that could be called "Faux Cyrillic"

– replacing Latin characters with visually similar Cyrillic ones, to make something look more Russian. Don't expect them to be consistent with it, though.

This is because Cyrillic is based on medieval Greek completed with Glagolitic (sometimes inspired by Hebrew – ц, ш) letters, but due to reforms by Peter the Great, it has the same basic design principles as the Latin alphabet (stroke thickness and placement, etc.). This has resulted in an alphabet with letters that range from deceptively familiar to the strikingly different. The Latin alphabet itself is based – via the Etruscan/Old Italic one – on the archaic (pre-classical) Greek one, and Hebrew and Greek scripts are based on Phoenician script, so they are all related. Where the (English form of the) Latin alphabet has twenty-six letters, the (Russian form of the) Cyrillic alphabet has thirty-three.

The perpetrators ignore the fact that these letters are, in actual Russian, pronounced completely differently from the Latin characters they are supposed to represent, which can result in a tricky reading task for those who can read Cyrillic script.

Below is a list of popular letters used with this trope, and their proper pronunciations:

Latin letters and the Cyrillic letters incorrectly substituted for them:

The number of Cyrillic letters that look similar or identical to Latin letters or numbers but represent slightly or entirely different phonemes doesn't help either:

And that's only the letters that exist in the Russian Alphabetnote And the Bulgarian Alphabet, which has all letters of the Russian one except for Ё, Э, Ы specifically. If you go to other languages written in Cyrillic, you'll find gems such as:

This can also happen with alphabets other than Cyrillic, such as the use of the Greek letter sigma (Σ) as an E or delta (Δ) or lambda (Λ) as an A, even though "Ε" and "Α" are actually perfectly good Greek letters themselves. (Sigma, delta, and lambda are actually the analogues of S, D and L, respectively, although delta is a "th" as in "then" in modern Greek.) Sometimes Greek letters are also used more or less correctly to write English as a substitution of real Greek language.